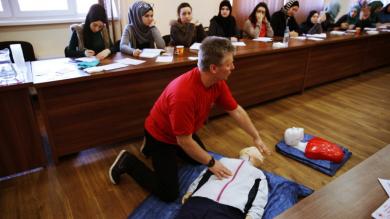 A lot of us heard the proverb "cures one thing but causes another". Many had such experience, and that was a sad one. However, the situation may be much worse: person’s health deteriorates; or even more he or she loses life not because of the accident, but due to the efforts, made by nearby people. With the best intentions and the sincere desire to help, but because of ignorance or delusions, sometimes, peopleharmmore than help. Or even they just harm.

The coach did not "bombard" the students with boring theory about "what we must do", but began by telling “what things we must not do”. This allowed the listeners to join in the work in easier way, as well as to streamline the information, which they had already heard before, and to repel the false stereotypes.

In addition, Olexander emphasized that the psychological first aid also was required (not less than medical) to victim. Often, the ability to calm the person and to enlist his support in the manipulations, made on him, becomes a key factor in the aid effectiveness.

The information pack covered a wide range of situations when a person may need outside help in variety injuries, fractures, bruises, burns, bleeding, epileptic seizures, recognition of infarction, stroke and heart attack; in cases of snake bites and insect, getting offoreign object in respiratory tract, resuscitation in case of drowning, and resuscitations for respiratory and cardiac arrests.

The women were able to polishall received skills on each other, and specific ones (such as intensive care) - with the special medical mannequins. Mannequins were three, "baby", "adolescent" and "adult", so women could take into account the specifics of helping for representatives of each group.

Having successfully learnt the program, the participants received the international certificate.