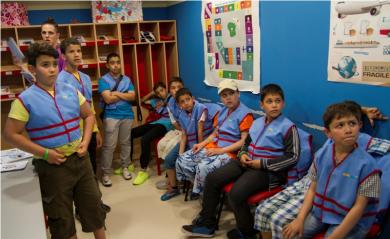 Because participants of the Children's Summer Camp at Kyiv ICC seem to have a thorough thinking on the matter. Thus, they visited Children’s City Of Profession KidsWill last Thursday, where each child could dive into the “adult life” for some time, with its permanent attributes, such as need to get a passport and a job. At the same time, the “money” they earned could be spent as they wished, and one could try different professions in turn in order to find something they liked best. Number of attempts was only limited by the general duration of stay in the City.

thus, the Project allows each child to not only gain maximum understanding of different professions, but also get the idea of economical and legal principles, on which the modern society is based.

Little Muslims tried themselves in different specialisations and roles: they undertook the whole procedure of getting the driver’s license (in order to be allowed to autobahn), learned all the production stages at both Milk and Juice plants, at pizzeria and confectionery. And, off course, self-made pizza, sweets, juice and yoghurt tasted great!

Farming theme was developed yesterday, when they visited a mini-farm during their excursion to the city Zoo. They fed domestic animals and poultry, and petted lambs and goatlings — and a donkey, too!

They also looked over the enclosures with wild animals and birds, had fun on the playground, made pictures and ate ice-cream.