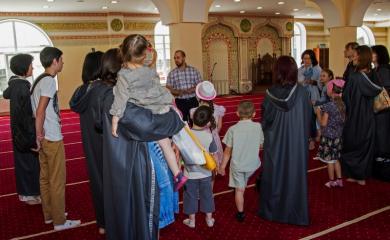 Long-awaited guests visited Kyiv Islamic cultural Centre last Saturday, namely internally displace kids with their mothers and grannies. Ms.Tamara Romanova, a coordinator from 9/11 Frolivska Str. Volunteering Centre for Assisting the Internally Displaced Persons, organizes a group of 8 women and 9 children. The kids met new friends and participated in a range of master-classes that were free of charge for the guests, and their Mothers had a chance to relax and forget about the war and substandard living conditions, and just chat idly over a cup of tea.

The ICC activists prepared for that visit in advance, as it has been scheduled as early as in mid-may when the volunteers delivered diapers of the smallest sizes and some powdered baby food, bought by pupils of  Gymnasium “Our Future” for the funds they raised on a charity fair. Tamara Romanova then shared their plans of holding a scale event for internally displaced children on International Children’s Day (June 1); the ICC volunteers, on their part, proposed to host a smaller fest of that kind for those interested a week later.

When all the details were discussed, the Muslims printed invitations with Master-Classes schedule and a roadmap on the back, and handed them to Tamara Romanova, who gathered a group of people willing to learn something about the followers of Prophet Muhammad and Islamic culture.

The kids found legs rather quickly. Taking advantage of the opportunity to run around without being withdrawn, they explored the mosque, climbed the minbar, turned cart-wheels on a soft carpet and studied the interior, while their mothers listened to Mr.Tariq Sarhan speaking about Muslims’ everyday life and its schedule, about the prayers schedule and qiblah (marked with mihrab), etc.

Having started the event with positive attitude and will to learn something new, they continued it in the similar way. Before entering the mosque, the women were proposed to put special robes on, and their first reaction was: “Cool, we’re like in Hogwarts!”. The ladies liked the robes so much that they wore it all day, although they were told it wasn’t necessary after they left the mosque.

When the excursion was over, mothers stayed for a luncheon, and their children went to play outside and participated in different games and contests. They joined their parents for some time later in order to have a fast snack, hot-eyed, to then leave once again for master-classes, prepared by the teachers of Kyiv ICC Children’s Summer camp with due account for age and interests. This, however, didn’t stop the kids’ “raids” on the tables with sandwiches, sweets, tea and juice: there was always someone around for a snack. The smallest children appreciated the playroom of Women’s Development Centre “Maryam”.

Meanwhile there was a heavy activity going on at the Master-Classes: children clay modeled, glued applications of coloured salt, …

… Children left the ICC with their craftwork, presented colouring books and new acquaintances. One boy fitted the group of his Muslim peers so well, that was hardly found by his own mother some time later, as he went wherever they went and did whatever they did.

God willing, thi was not the last excursion of that kind: the volunteers and the mothers agreed to gather once again after Ramadan, and make another event for the internally displaced children together. This time the mothers are entrusted with master-classes, and the ICC volunteers are to provide room and treats for everyone.