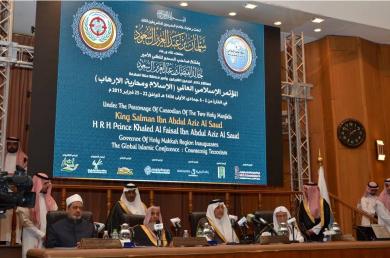 The conference in the holy city of Mecca (Saudi Arabia) started on February 22. The list of participants, who are  more that 400 in number, is quite impressive: besides representatives of different Muslim social organisations, there were  senior Muslim scholars and counterterrorism security officers from around the world. So much the more honorable it was to receive an invitation card for Mr.Bassil Mareei, Head of AUASO “Alraid”, who eagerly represented Ukraine. Toda, closing remarks are to be made and closing ceremony is to be held.

During the opening ceremony, Head of the Muslim World League Abdullah bin Abdul Mohsen al-Turki said the goal of the meeting was to define terrorism and draw practical plans to combat it by all countries. Counteraction must begin with thorough understanding of reasons of terrorism, and fanaticism and ignorance are the main of them. These factors lead to misunderstanding of Islamic Teaching, mainly its principles of Muslim-Non-Muslim interplay.

The Conference is held by the Mecca-based Muslim World League, a group of nongovernment organizations, under the auspice of Saudi King Salman bin Abdulaziz. Unfortunately, the monarch who ascended the throne last month after the death of his brother King Abdullah, couldn’t attend the Conference himself, so he delegated Khalid Al Faisal Al Saud, the current governor of Mecca Province, to announce his appeal. In the document, King Salman urged Arab, Islamic and international cooperation and dialogue between the different faiths to face the threat of terrorism. Besides, the Monarch called everyone to be careful and critical to themselves first of all, in order to avoid actions working in terrorists’ favour, even indirectly.

Among the reasons promoting terrorism, matters of foreign and internal policy and even the intrafamilial relations were named. Those were ineffective education in both Muslim and Non-Muslim countries, social problems (unemployment, poverty, inability to give one’s children good secular and religious education), poor educational work with children in the families, ineffective work of the Mass Media in increasing the level of people’s literacy and culture, using terrorism to incite ethnic and religious hatred as means of achieving political goals, etc.

Such diversity of reasons demands complex counteraction measures, as well as uniting efforts of all mankind regardless the country, the profession and even the religion, as the latest statistics show that terrorism is not about only Muslims; on the contrary, most terrorist attacks are committed by non-Muslims, and some of them do this because of religious extremism. One can ask, why this fact isn’t well-known all over the world, and the attacks continue? Because it’s impossible to overcome terrorism with such lop-sided Media coverage as we have now.