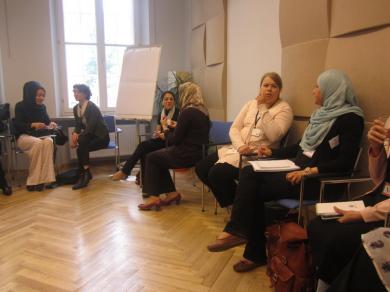 OSCE Office for Democratic Institutions and Human Rights (ODIHR) brought together 17 women representatives from 13 OSCE participating States to speak about their experiences of discrimination, including as the victims of hate crimes, at a focus group meeting in Warsaw on 13 May 2014.

Ms. Samia Arada, Ukrainian of Palestinian origin representing Female Social Organisation “Maryam”, spoke about the situation in this sphere in Ukraine — both to facilitators and the participants from Great Britain, Belgium, France, Greece, Italy, Romania, Poland and other countries.

She told that, thank God, Muslim women don’t feel discriminated for their religion badly in Ukraine on the state and social level. The problems are mostly grassroot, such as ungranted right to make a hijab-clad photo for one’s domestic passport, problems with getting a job for women in hijab, as not every employer is eager to recruit such “exotic” members for their team, and, of course, a possibility of shifting to ethnic and religious origin in solving grassroot conflicts in public places.

Some of other participants also voiced the same problems in the course of discussion, though their complaints weren’t limited to that: violent incidents became more frequent in some countries, with headscarves being teared off the women’s heads and even the women beaten.

“Unfortunately, Muslim women generally do not report hate crimes and incidents to the authorities, because they are often actively discouraged from doing so,” said Floriane Hohenberg, Head of ODIHR’s Tolerance and Non-Discrimination Department. “This contributes to the marginalization of entire groups in our societies, and ODIHR is focusing on this issue to support governments and civil society in their efforts to address hate crimes and discrimination effectively”.