Arab Students Want to be Taught in Ukrainian 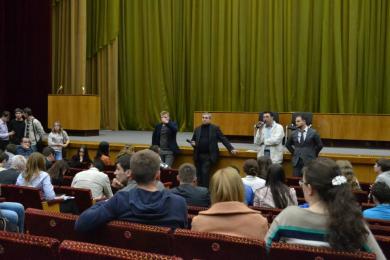 This was one of the suggestions voiced at the meeting with the Dnipropetrovsk region students, held by the Representative of Dnipropetrovsk Region State Administration Mr. Volodymyr Chabanov and the RSA Head’s Chancellor Mr. Borys Nhtiterman on April 22. The officials asked about the problems faced by the young people in the region and were ready to hear their proposals.

The youth spoke of sore points, such as awful living conditions in the campus and the overcrowded public transport (the last is not  only inconvenient, but dangerous as well in case of an accident). They didn’t fail to mention lack of coordination between the government of the region and the social organisations; the absence of feedback — even if you got through to an official for a wonder, there’s no reactions you can see.

Arab students delegated the Head of “Al-Mustakbal” Social Organisation  Mr. Baraah Henawi and Head of Syrian Students’ Community Mr.Umar Al-Barjas to represent them at the meeting.

Their first wish stirred the audience up: Arab students ask to teach them in Ukrainian. These “Arab Banderists” have a trivial reason for that: they experience difficulties when approaching the public authorities, as all the necessary forms have to be filled in in Ukrainian, and all the explanations are provided in the same language. Young men don’t feel aggrieved for speaking Russian and are willing to learn the State official language which is Ukrainian — they only ask for qualified teachers.

The other two requests are mostly about the situation the students from Syria are in The Civil War in their Homeland forced them to ask for a possibility of paying for their education every month instead of giving the equivalent of USD 4,000 once a year. They also ask for a permission to work in Ukraine, as they are deprived of their relatives’ financial help and heed to make their living without violating the law.