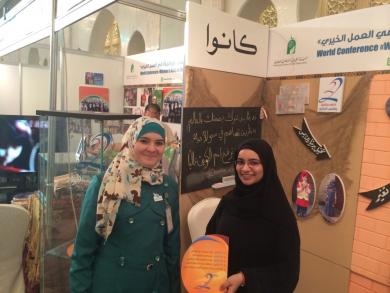 Ms. Suzanna Islyamova, Head of Women’s Social Organisation “Maryam”, had a business trip to Kuwait in the end of 2014, in order to present the organisation’s achievements for the past 20 years. A dramatic change in social and charitable initiatives of Ukrainian Muslim women is seen over these two decades. A small trickle of enthusiasts grew into a special committee that coordinates the work of Muslimahs’ social organisations all over Ukraine.

The presentation took place within the terms of  World Conference “Women’s Role In Charitable Work” affiliated to the Government of Kuwait, which helps in finding sponsors for women’s charitable initiatives. Women from other countries of Eastern Europe and some Arab countries participated as well.

They not just gave account of their work to the sponsors, but also shared their experience, exchanged ideas and advice, and made arrangements for joint projects.

“Maryam”’s fruitful work was honoured with a special award.