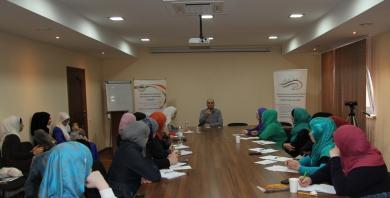 Mutual support is one of the main principles of work at the All-Ukrainian Association of Social Organisations “Alraid”. Mutual help, cohesion and unity is the base of the team, so different seminars and trainings for volunteers from all over Ukraine are held on a regular basis. Such meetings give the opportunity to coordinate work, share experience, and discuss the most important challenges the AUASO member-organisation face.

One of such seminars was held in Kyiv on November 15 and 16, having gathered about 30  female Muslim volunteers from Lviv, Zaporizhzhya, Vinnytsya, Kharkiv, Kyiv and others. It bears noting that women’s seminars or trainings are held twice a year by the AUASO “Alraid” Department on Family Affairs.

Many problems in the work of organisations in different cities and towns were discussed during the two days, and the opinions on the possible salvations were shared. The seminar included a mini-training on analysing the problem and working out the best solution for it.

The volunteers also attended several spiritually-related lectures on keeping stamina in trials and specifics of working with a Muslim social organisation, including role of Muslim women in such work.

The participants worked pot several possible solution for the most topical issues, considering the current situation in Ukraine, and enunciated the general guideline for the female activists’ work across the country for the nearest future. The discussion reached its peak at this point, as the realities differ from town to town, from city to city.

The women thanked the facilitators at the closing ceremony, and noted that the event was very useful and informative for them.