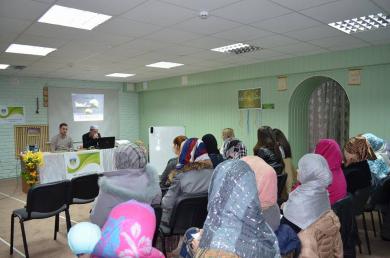 Not only the member of local Muslim community, but also those interested in learning more about Islam came in order to listen to the guests and ask the topical questions

A weekly Sunday lesson for Muslim women of Sumy at the Social Organisation “Druzhba” (Ukr. “Friendship”)” office was attended by the Head of AUASO “Alraid”  Islamic Culture Department , Mr.Yevhen Hlushchenko, and Shaikh Edgar Abdulghani, on October 26. Not only the member of local Muslim community, but also those interested in learning more about Islam came in order to listen to the guests and ask the topical questions.

The latter not only studied the reports of the social organisation, but also gave several lectures, including one on the principle of the “golden mean” (“al-wasatyyah”), and the one on the resettlement of Prophet Muhammad, peace and blessings be upon him, and the first Muslims from Mecca to Medina, which was chosen as the beginning of the new calendar (this topic was covered as the Hijri New Year of 1436 was on the eve of visit, October 25).

Understanding of the al-wasatyyah principle has never lost its importance; still now it’s even more topical, understanding the balance between material and spiritual, between the individuality and the society, between the inclemency and weakness. Today, when the very existence of our country is under threat (for the first time since the Independence), when the external aggressor occupies one region and destroys the whole settlement of the other, while the propaganda from abroad targets the Ukrainian Muslims in order to keep them away from taking active part in defending their country; it’s vital to know how to scale all the “pro et contra” and take right decisions.

The Holy Qur’an says, “We have not sent down to you the Qur'an that you be distressed, but only as a reminder for those who fear (Allah) [20:2-3].

After the lectures, all the guests of the evening were invited for a joint dinner and tea.