Sending To Glory: It’s Important That Everyone Knew How To 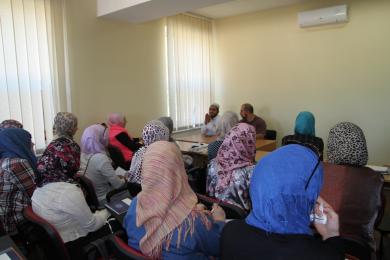 In the beginning, the word was given to Shaikh Haydar Al-Hajj, who spoke of necessity to be always ready that there could be no tomorrow for each particular person

When someone close dies, troubles on sending him to glory in a dignified manner always accompany the grief coming from the loss. People used to gain such experience quite early over the past centuries — at first, the little children watched the adults sharing their roles in the process, and started providing possible assistance when they became older. More close social ties of both city and rural residents promoted taking part in the events occurring to close and fare relatives, neighbours, friends. In the recent years. however, the older generation tried to screen the youth from such sad duties thinking their own knowledge of all the necessary procedures is enough for their whole family. And then they pass away, leaving behind the former youth in confusion, how to burry their close one according to the rulings of Islam when the knowledge of the necessary procedures left the family with its diseased member, and there’s no opportunity to get a quick answer from somebody else?

For that reason, lectures and seminars on that matter, where all the ceremonies are taught, are no less topical and claimed for, than during the first years of Islam. Such seminar was held by the Women’s Social Organisation “Maryam” as well — they facilitated it on September 6 at the Kyiv Islamic Cultural Centre’s Mosque.

In the beginning, the word was given to Shaikh Haydar Al-Hajj, who spoke of necessity to be always ready that there could be no tomorrow for each particular person. Which means, one might not have another chance to remedy evil, apologize for the rough words… He spoke about a man who was granted Paradise inter vivos — he always forgave everyone who had hurt him by either word or action during the day before he went to sleep. The Shaikh also reminded of necessity for constant purifying of one’s heart from the sins they committed by the sincere and active repentance (if a person caused harm to someone else by the sin he committed,  he must do his best to mitigate the effect of his sin as much as possible), and, of course, of importance of making dua’ so that the Lord didn’t lay us to rest in any other state than being an obedient Muslim.

Ms.Vira Fryndak not only spoke during the second part of the seminar about washing the dead body (both in mortuary on an autopsy table, at home and in other non-standard situations), but also showed the process on a full-sized dummy. She also gave detailed explanations and showed how to make a shroud and put it on the dead person; how to find out how much cloth is needed and what actions have to be undertaken.