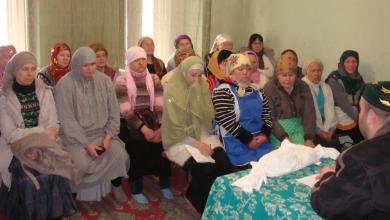 Sverdlovsk Muslim community approached the Luhansk Islamic Cultural Centre and asked them to facilitate a seminar for women in their fifties. The event took place last Saturday; about three dozens women came to Sverdlovsk city Mosque.

It is commonly known that in ancient Rome Matrons was a common title for freeborn married women; those mothers of the family who raised their kids up to the age of marriage. They played an important role in the society, as it was recognized that such a woman, having raised worthy sons and daughters, made a greater input in the society that any public figure. The experience they gained during these years of maternity made matrons important participants of social life good at making wise and balanced decisions.

Tatar Matrons of Sverdlovsk also think that they didn’t lose their social significance now when they don’t have to be vigilant against their grown-up children. Their children’s independence, on the contrary, gives them even more time and possibilities to use their potential beyond the family. Mr.Rifat Sabitov, the Psychologist, helped them understand which social sphere they’re interested in at the most.

In his turn Mr. Muhammad Alustaz reminded of the values every Muslim woman should have. He gave examples of wives, mothers and daughters of the God’s prophets, peace be upon them all, mentioned in the Qur’an and Sunnah. Imas stressed that the husband’s weaknesses don’t excuse the wife’s wrongs, as the Pharaoh's wife, Asiya, believed and became obedient to God despite of her husband being sure that he was divine and could do anything , including cruelty and injustice.

Besides, the participants learned more about the sad duty of the women of their age, namely paying last respects to their elders and pass on the torch of this knowledge to their descendants. Ms. Ferida Uruzova explained how the late women are washed and shrouded; what’s the difference between the shroud of a man and the shroud of a woman, and how the requiem prayer Janazah is performed.