Both Old And Young Study The Qur’an 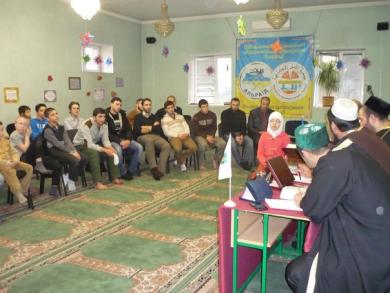 The youngest competitor was only 4 years old, and the oldest was 82 — Qur’an reciting contest, held at Donetsk Islamic Cultural Centre really gathered women, girls and children of both sexes from a various social background and age groups.

More than 50 people from different settlements of Donbass sent attendance requests in order to participate in this contest, facilitated by the Social organisation “Al-Amal” female department.

Among the jury — Imams from Luhansk and Konstantinovka, Headmaster of Arabic language Sunday school and Head of “Al-Amal”.

Female and children’s groups were divided in two levels of difficulty.

Competitors of the first level children’s group had to recite “Al-Mulk” and “Al-Buruj” (Hamid Abdo won the I place, Shagar Abu-Bakr the II, and Omar Ismail — the III); the second level recited only “Al-Buruj” (Amira Hashan, Natalie Ismail, Ashab Ali Ziyautdinov and his sister Mariam, Muhammad Barush shared the I place, Mahmous and Alautdin Isa shared the II, and Ibrahim Abdo got the III place).

Competitors of the first level of the female group recited “Ar-Rahman” and “As-Sajda” (Dinara Valeeva won the I place, Huda Khatyb — the II); the second level competed only in reciting “Ar-Rahman” (Rima Abu-Bakr won the I place, Khalima Fathullina — the II, and Anfisa Hashan and Yulia Milchenko shared the III place).

All the contestants received  recognition gifts after the winners were awarded.