“Silence Of The Lambs”: Is It Normal When The Couple Hardly Speaks To Each Other? 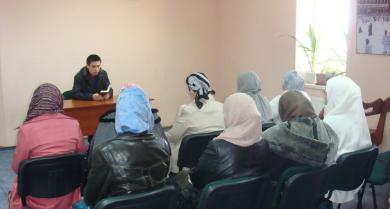 “Silence Of The Lambs”: Is It Normal When The Couple Hardly Speaks To Each Other?

This questions was raised among many others at the female seminar held on March 23 at Luhansk Cathedral Mosque. Three dozens of participants narrated by psychologist Mr. Rifat Sabitov tried to find out if the situation was normal.

It appeared that in many families the spouses’ lives and minds are parallel, ant not at all by the criteria of unity or common tendency. They are simply disjoint: having shared the spheres of their responsibilities one and for all, people don't go into the details of each other’s lives, not to mention asking each other’s opinion on some social phenomenon, event, book, movie, scientific discovery or theological conclusion.

Mr. Sabitov used suggestive questions and strong example to help the participants find reasons of such non-interference in each other’s affairs and demarcate trust from indifference. Besides,  he gave some advice on finding common ground and avoiding conflicts.

In his turn, Imam of the Luhansk Cathedral Mosque Mr. Muhammad Alustaz spoke about the advantages the Islamic parenting has over the secular parenting. “Faith in God is the cement that holds together the bricks of the moral stances. A child raised in aiming for God’s contentment is more likely to stick to the morals cultivated by parents than the child, whose good behaviour and obedience were “bought” with candies and toys, as the latter rebels as soon as the parents no longer have something to reward them with.”