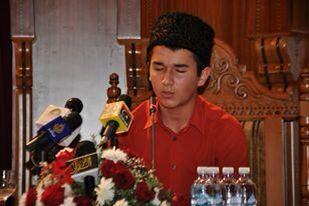 The practice of learning the Holy Qur’an by heart has been revived on the Crimean peninsula recently, after being abandoned for about a century. Hafidh are beginning to appear among the Crimean Tatars who were deprived of their experts of the Holy Book due to hardships and sacrifices they suffered. Not least of all — because of the help provided by AUASO “Alraid”, that supported funding and functioning of the High School of Hafidh in Simferopol.

Students and graduates of this School try themselves in prestigious international contests again and again year by year, gaining higher and higher scores. It’s because of them Ukraine becomes well-known at such events, and our country’s reputation is positive.

Head of the World Organisation For Learning the Qur’an Mr. Abdullah Ali Basfar and his representative Al-Senan Abdullah were the special guests of the contest.

Ibraim Abdulmuinov, the seventeen years old young man from Crimea, was one of the five prizewinners at the prestigious International Hafidh contest in Tripoli (Libya) which took place on November 23-28.

The event was organized by the Ministry for Waqoof and Religion of the State of Libya.

Graduate of the High School of Hafidh in Simferopol was able to dash round most of his rivals representing 67 countries and win the fourth place, having confidently bust loose the high-level training of Ukrainian Hafidh.