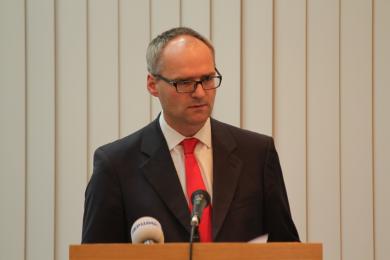 Mr. Wolf Ditrich Haim, Plenipotentiary Ambassador of the Austrian Republic in Ukraine, underlined several reasons why literary and scientific legacy of Muhammad Asad had been an integral part of the Austrian science

This was an conclusion implicit in the reports delivered at the International Scientific and Practical Conference “Significance of Scientific and Intellectual Legacy of Muhammad Asad”, held on May 16, 2013. The invitation was responded by more than 80 participants, including diplomats, politicians and experts in Oriental and Islamic studies from Ukraine, Poland and Austria. Unfortunately, a Russian expert in Islamic studies could not come.

Austrian pages from the life of Leopold Weis

Mr. Wolf Ditrich Haim, Plenipotentiary Ambassador of the Austrian Republic in Ukraine, underlined several reasons why literary and scientific legacy of Muhammad Asad had been an integral part of the Austrian science. Lviv in that time was part of the Austrian and Hungarian Empire, with the name of Lemberg. After the World War I, the Weis family moved to Wien, where Leopold entered a university.

Besides that, Mr. Ambassador underlined an extremely important similarity of Ukraine and Austria, the indigenous Muslim population. “I believe it’s noteworthy because in a major part of European countries Muslims are represented by immigrants in the fourth or fifth generation at best”.

In 1912, the law on recognition of Islam as an official religion was enforced in the Empire, which laid the solid ground for harmonious and fruitful coexistence of followers of Christianity and Islam. This fostered favorable atmosphere of mutual respect and tolerance, making the country safe from great many problems in future.

Summing up, Mr. Haim says: “Asad’s personality is another reason behind similarity of Ukraine and Austria in Islamic issue. Therefore, I’m very pleased to welcome the studies of his biography and legacy in the framework of an international scientific and practical conference”.

Influence of Polish culture and novels of Henryk Sienkiewicz

Leopold Weis was born in the time when the official language in Lviv was German. The city, however, continued to be an important center of the Polish culture, and even the birth certificate of Leopold was issued in Polish language.

Young Leopold was overwhelmed with reading novels of Henryk Sienkiewicz, which, combined with natural environment surrounding him in Galicia, made grown up Weis open to other cultures, but with a deep feeling of responsibility to others and a sense of participation.

Mr. Zagorskidescribes his personality as follows: “Asad was a Jew grown up in the Polish environment and, at the same time, in German language Empire. When grown up, he was conscious in making choice of his fate, but he would never forget about his roots. In fact, he became a member of the multinational Islamic ummah; his feeling of his immense responsibility for their subsequent development and gains made him a most influential thinker of 20 century”.

Although Muhammad Asad gained widespread international recognition, in his native land some superficial facts of this outstanding man’s biography have been known to a narrow scientific circle, not to mention the total lack of works devoted the Asad’s legacy in the national Islamic and Oriental studies.

Mr.Seyran Arifov, Master of Shariah and head of “Alraid” auditory commission, says with gloom: “In the Arab world his personality and role has been studied all-round, whereas Ukrainian scientists, alas, have just started work in this field. I believe that there’s still a wide room for investigations and discovers”.

“All of us have heard that Asad was regarded as ‘native’ by representatives from Austria and Poland due to his origin, place of residence and cultural environment. At the same time, Muhammad Asad was a founder of Pakistani and Saudi statehoods, for several years he was representative of Pakistan at the UN and advocate of the interests of Palestine and its Arab residents”.

“As can be seen from his biography, Asad was not a room scientist, as he would visit hostility areas, he would take part in settling conflicts not only in high power and diplomatic offices, but on the ground, by negotiating with conflicting parties and exposing his life to dangers”.

“He is very interesting, brilliant and universal personality, and I believe that Ukrainian science will give a proper judgment of his rich scientific and literary legacy”.