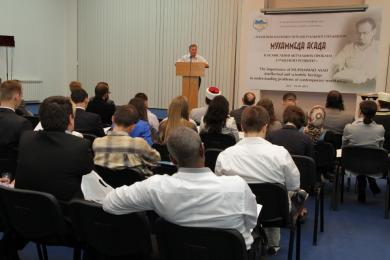 The International Scientific and Practical Conference “Significance of Scientific and Intellectual Legacy of Muhammad Asad”, held on May 16, 2013, discussed not only link of this prominent man with various nations and countries, but his unique legacy produced by this synthesis.

“Travel stories of Asad are a mine of information”

Great interest to the conference was shown by Dr. Günter Windhauer from University of Wien (Austria), an expert in this field. “Life and work of Muhammad Asad has been in focus of my academic work since the middle of 90s, when I began my dissertation study devoted to his youth and his journalistic carrier. My first book “Leopold Weiss, or Muhammad Asad: from Galicia to Arabia, 1900-1927” is written in the basis of this dissertation”.

Rare photographic pictures and documents included in the edition allow for a close look at Asad conversion to Islam and fostering of his Muslim identity in the autosphere of the German language culture of early 20 century. This book had great many awards and positive responses from experts and common readers alike, and the edition had to be published for another three times.

Dr. Windhauer continued his study later. His second book was published in Arab language in 2011. The edition contains analysis of Muhammad Asad’s stay in Saudi Arabia in 1927-1932.

“He did not confine to mere traveling across the area of Jeddah (where people of European culture had no access), talking to common people and analyzing whatever he had seen from the perspective of a person with other mentality. Muhammad Asad was regularly coming to the court of Abdul-Aziz As-Saud, and short after that he became an entrusted friend and a freelance counselor of the founder of the Saudi Kingdom”.

“Travel stories of Asad are a mine of information about nuances of Middle East policies in that time and a valuable material for ethnographic, religious and cultural studies”.

Apart from learning, Muslims can teach

Dr.Vyacheslav Shved, a leading researcher of the Institute for World Economy and International Relations of the National Academy of Sciences (NAS) of Ukraine, made emphasis on cultural exchange between members of various confessions and denominations.

As pointed out by Muhammad Asad, Muslims do not seek for turning the whole world to Islam or submitting it to their way of life, but other confessions will have their positions strengthened if they are guided by Muslims’ way of in showing their religiosity.

As discovered by Dr. Shved, this idea has been articulated in our days by many influential people: “Blessed Svyatoslav, archbishop of the Ukrainian Greek-Catholic Church, says that the Christians who are becoming ashamed of showing their religiosity now can learn much from Muslims who are not ashamed to practice openly their religion”.

He is repeated by Mrs. Saeda Warsi, a Muslim, who is deputy-minister of foreign affairs in the U.K.; she is calling members of all the confessions in the U.K. to practice their religion openly, as done by their Muslim compatriots. She says: “I am frightened by the militant secularization that is taking hold in our society. Its pith and instincts are so intolerant that they remind of totalitarian and dictator regimes”.

“A little bit later this issue was dealt with in a public speech of the British Queen Elizabeth II who stood as an advocate of religion in the conditions of the increasing public indifference. According to witnesses, the wordings being point-blank, the Queen’s speech was a more forthright than ever over the 60 years long history of her rule”.

Elizabeth II emphasized that religion had always been life guidance for people, and stressed that a duty of the Anglican Church led by her had been to protect confessional freedom of the followers of other religions and enhance the role of religious institutes in moral renaissance of the society”.