Love for native land in works of Crimean photographers: “Crimea through camera lens” 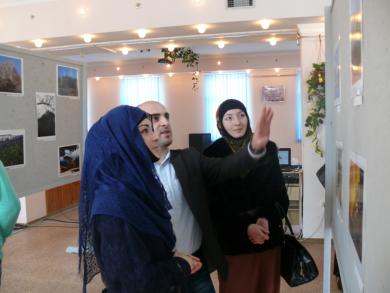 It was from February 21 till 23, 2013 that the conference hall of the Islamic Cultural Center at the Crimean unit of “Alraid” hosted an exhibition of works by young Crimean Tatar photographers Emin Sadykov, Reshat Aliyev, Ismail Tantan and Emil Kurtumerov.

Apart from admiring the photos of Crimean beauties, visitors could talk tete-a-tete with photographers who were willing to tell them histories of making their photos.

The exhibition was conceived and implemented by activists of the Women’s Public Organization “Nur”. Photographers express sincere gratitude to everyone who contributed in its organization.

Who can reproduce the beauty of the native land?

It’s well known that the beauty of the native land can only be reproduced by the one who has sincere love for it, especially the one who has imbibed love for this land with mother’s milk, the one in whose veins the blood of ancestors is flowing, who lived on this land for centuries.

Inspired with this idea, the organizers felt that a photographic exhibition like this would be a perfect reminder about omnipotence of the Most High Who gave all the Crimeans a chance to live on this blessed land of the Crimean peninsula and enjoy its bounties and beauties.

The photographic exhibition was visited by the chairman of “Women’s League”, staff from Crimean news agencies, art-critics, university lecturers, leaders of youth organizations, students of various HEEs and judges of the arts.

Mrs. Elmira Cherkozova, an art-critic, says that the exhibition offers significant support for young photographers in their creative work. She says about high level of its organization, although an event like this is the first one in Crimea.

Mr. Emin Sadykov, a participant, told his impressions to our correspondent: “It is a dream of any photographer to show his works to as many as possible numbers of people. For this exhibition, I’ve selected my best pictures in the last five years”.

“Each place, each tree branch in Crimean inspires one on creating a chef d’euvre. The realness can be seen in details: in the sunset, in the dawn, in elements of nature”.

“Works displayed at the exhibition depict many wonderful places in Crimea. For me, the most enjoyable and thrilling photo is the one of the town Bakhchisaray. I used to gaze at its photos earlier, when living in Tashkent, and I loved it with all I had when coming back to the homeland”.

“It should be said that pictures of other photographers are very good, too. Thanks to contributions of several photographers, each one with his peculiar vision of Crimea, viewers can see the landscape of our native land from versatile perspective”.