Fifty grocery baskets for the needy people in Zaporizhzhia 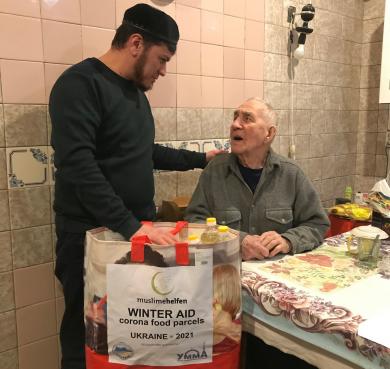 Zaporizhzhia: it took a week for Islamic Cultural Centre activists to have handed almost 50 grocery baskets out to people in need. The initiative is part of the all-Ukrainian charity campaign involved Islamic cultural centres in different cities.

Mukhammad Mamutov, the imam of Zaporizhzhia city, said this time they provided the above relief primarily to the elderly.

“There are dozens of elderly Muslims in our city,” says Sheikh Muhammad. “Most of them have been regularly visiting the mosque for years, especially on Fridays. These people always help the community in any way they can, for example, they participate in funeral arrangements. However, sometimes we are not able to support them, so this time we decided to make up for it.

Some people were invited directly to the ICC to donate food baskets. Rakhima Akhmerova, the head of Altyn Ai, the local Tatar community, expressed the gratitude to the Islamic Centre management and sponsors who provided the assistance. As for those who could not come to the mosque ― mainly large families and lonely old people ― volunteers delivered the grocery baskets to their homes.

“We have already distributed almost 50 food baskets this week,” the imam says. “We have heard many words of gratitude ―that’s very pleasing and, of course, motivating to keep working. We are going to donate more grocery baskets in the coming weeks.”

Let’s remind, in January, a number of needy people from Dnipro and Kyiv have already got grocery baskets due to the support of Alraid, the All-Ukrainian Association, and MuslimeHelfen, the German charity fund