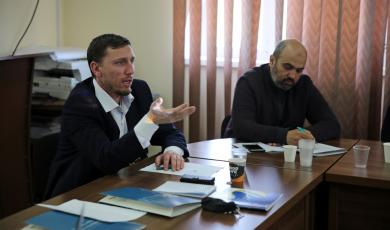 On saturday, 27 April, people with hand-luggage started arriving at Kyiv Islamic Cultural Centre since early morning, for “Alraid” Association held a General Assembly, according to its Statute, and welcomed delegates from member-organisations from all over Ukraine.

The meeting was opened by the Association’s Head, Sheikh Seyran Aryfov, who drew up the balance sheet of the previous two years, having outlined both the achievements and mistakes to work on. One by one, he mentioned every field of the Association’s activities as of his midterm in office, and reported of the items of the Strategic Plan that were already fulfilled since he took the job. After that, the report of the Chairman of Board of Internal Auditors, Mr.Ismail Qady, was read aloud, as Mr. Kady, unfortunately, couldn’t participate in the gathering in person.

Word was also given to Sheikh Said Ismagilov, Mufti of RAMU “Umma”, who estimated the work of Islamic Cultural Centres from the prospect of a religious figure. His advice considered both the aspects that needed closer attention and the aspects the ICCs were lacking.

Further on, discussions go to the theme of communication with both citizens and state and religious bodies.

Women’s initiatives were represented by Ms.Olha Fryndak, who spoke about the activities of the League of Muslimahs of Ukraine, and asked the Administration to provide more support for some of those initiatives in various Ukrainian cities.

Finally, the participants divided in several workgroups for brainstorming, with each of the group offering steps to improve certain areas of the Association’s activities.