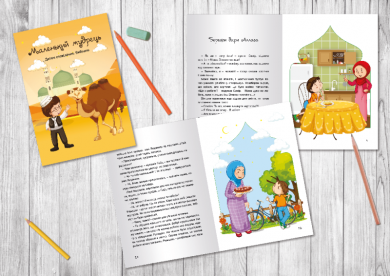 In the end of Ramadan, another book of children’s stories was printed, titled “Malenkiy Mudrets” (Ukr. “A Little Sage”); and a colouring book, which allows a child to learn some basic everyday dua’s while colouring the pictures with their parents. Both editions were in the gift sets presented to little Muslims during the Eid al-Fitr celebrations at “Alraid” Islamic Cultural Centres; while the rest of the pressrun is to be shared among the ICCs where anyone can pick some for their little ones. Ask for your free copies at the nearest ICC!

“Malenkiy Mudrets” consists of 15 stories told by various mothers to their own children when answering their questions, which were sent by the readers of “Arraid” newspaper and published on the “Children’s page”. Over a year ago, the editor’s office started collecting those stories and printing them as little children’s books. Every story is illustrated by colourful pictures by Maria Zakharchenko, so that the kids would not only listen to their parents’ reading, but want to try and read the book on their own. The edition was of 2,500 copies, the part of which was distributed during the recent Eid celebration. So, if you want a free copy for your kid — waste no time and contact your nearest ICC!

The colouring book is more than a time-killer: a child will learn some basic everyday dua’s to thank God, and the essential rulers of islamic etiquette while colouring the pictures with their parents. The pictures and captions desctibe the life of 5 year-old Amina and her family, namely her parents and her little brother Ridwan. The book was written by Zhinan Rubchenkova and illustrated by Inna Aras. The edition was of 2,000 copies, so waste no time in placing your order, too!

Noteworthy, it wasn’t the first children’s book to be printed in Ukrainian; the Association had already printed stories’ collections “Reward: Selected Stories” and “My Favourite Feast”.