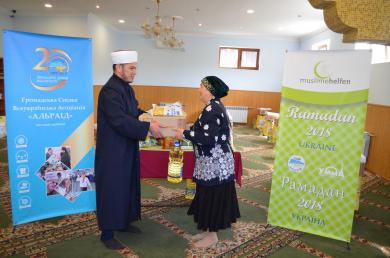 Due to cooperation between All-Ukrainian Association “Alraid”, RAMU “Umma” and a German Charitable Fund Muslimehelfen, 210 grocery packs bought for donations of German Muslims were distributed among the needy Ukrainian Muslims during Ramadan this year. This year’s distribution began with giving away 40 packs on the threshold of Ramadan; the last stage of the project was completed last Saturday.

Overall 210 packs — each containing 2 packs of tea, 5 kg of sugar, 5 kg of buckwheat,5 kg of rice, 5 kg of pasta, 4 kg of cookies, 10 kg of flour and 3 L of oil — were distributed; 70 in Kyiv, 25 in  Zaporizhzhia, 15 in lviv, 55 in Dnipro, 45 in Novooleksiivka. The list of receivers included internally displaced persons from Crimea and Donbas, guardians of orphans, and needy people.

Noteworthy, cooperation with Muslimehelfen began in late 2015, when a famous Muslim public figure Ahmad von Denffer attended Kyiv ICC. The guest from Germany had an important mission of finding a reliable partner for providing aid for the Crimean Tatars who were forced to leave the occupied peninsula. He found such partners in CSUAUA “Alraid” and RAMU “Umma”, and so the benefit was launched.