A Single Drop of Blood Hasn’t Been Shed in Vain: the Regular Action of Free Donations Was Held at the ICC 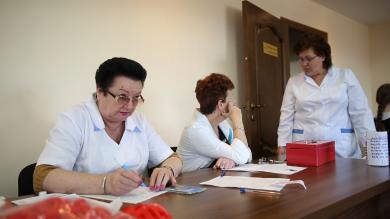 On Friday, May 27, Kyiv Islamic Cultural Centre was more crowded than usual, besides the visitors of mosque, pupils of gymnasium "Our Future" and their parents, who came to the Last Bell, there were people, who wished to share their blood without indemnity with those who needed, and doctors of mobile medical team of the Kyiv Blood Center.

Action of Initiative "Become a donor!" once again took place in collaboration with the Association of Young Donors of Ukraine (project "DonorUA"):The coordinator from Kyiv, Yuliia Novobranets, this time prepared a list of patients in very serious conditions at Kyiv hospitals, who needed the blood "the day before yesterday" in the literal sense of those words: the relatives couldn’t find a donor before the surgery (the surgical operation was very urgent), so the blood was given to them “in debt” in return of their promise to bring their donors with them and to fill the reserves of the Bank of blood.

Those “debts” were met by the participants of the action during the first hour and a half (five donors for three recipients), and after that the doctors just replenished the supply of blood for emergency needs. In total, 17 liters and 350 milliliters were collected — it is an amount that 40 donors donated after they had successfully passed the medical screening.

In addition, a few days before, the presentation of the new "Memo for donors" was held — now it is not only in Ukrainian, but also illustrated. The information is presented in more accessible and clearer way that makes the brochure more interesting even for those who will able to be a donor only in 10 years, because of their very young age.

The project “Become a donor!” expresses sincere gratitude to all those, who took the initiative: regular participants and new friends. We are so glad that more and more not indifferent people think about the problem of lack of blood donors and try to make a personal contribution to improve the situation. Special thanks to those who joined the action in an organized way: the students of Kyiv National Linguistic University and fighters of “Kyiv”, the elite operations unit of Police, — the appearance of many uniformed men, who were passing by the school line, aroused the admiration of children that for a long time shared their impressions with each other of meeting with “real cops of special mission unit” — What a child doesn’t want to meet a real hero?

"Become a donor!" is planning to hold the next campaign of unpaid donations in September; the organizers hope to see again a lot of great people who are not indifferent to the suffering of others. The previous action took place this year in March.