Welcoming Everyone For A New Exhibition Of Photo Artist Arvydas Shemetas “To Return”! 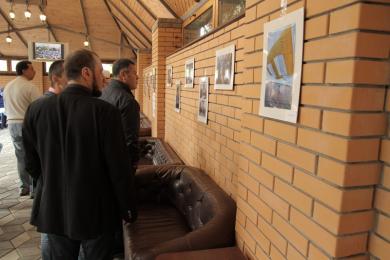 More than five dozens of pictures depicting the history of returning of Crimean Tatar people and their adaptation on their native land that has been a forbidden place for them for decades, are presented at a photo exhibition “To Return” coinciding with the 71st anniversary of the deportation. Photographs taken in the period of time between 1995 and today depict the moments of their return to their Homeland.

Exposition in a pavilion situated in the yard of Kyiv Islamic cultural Centre (25a Dehtyarivska Str.) is admission free and is open every day from 10 AM to 8 PM until June 1.

Arvydas Shemetas, a Ukrainian photographer of Lithuanian origin with more than 30 year of experience, is a winner of prestigious international contests and a laureate of multiple prizes. Mr. Shemetas was already an adult when the deported people started returning to Crimea where he grew up. He presented  58 photos of his 40,000 archive on the repatriates. The exhibition called “Qyatmaq...” (Cr.Tat. “To Return...”) was then held at Bakhchisaray cultural architecture complex “Zincirlı Medrese”, however, repeating it on the same location became impossible after the peninsula’s annexation.

The photographer presented both pictures of common people and celebrities from the very first days upon returning of the deported people and their descendants. One can see the Crimean Tatars’ accomplishment and household during the first years upon returning to the peninsula, numerous picketing and demonstrations they facilitated in order to defend their rights for the land, gatherings at special dates.

The photo artist demonstrates delicate skill of catching the moment and reproducing emotions, like joy and pain of returning home, smiles and tears, grieving and love.