“Custodian Of The Future And The Past”: The Society Needs Our Involvement As Never Before 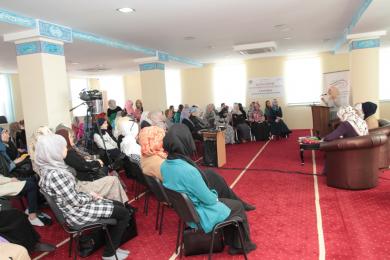 A traditional AUASO “Alraid” spring women’s conference was held at Kyiv Islamic Cultural Centre on Saturday. About 90 women arrived at the event, this time named “Custodian of the future and the past”, including special guests, namely a delegation from Indonesian Embassy, headed by Her Excellency Ambassador Extraordinary And Plenipotentiary Niniek Kun Naryatie herself.

The facilitators accentuated not only on rebutting stereotypes about Muslim women originating “from outside of the community”, but mostly of changing Muslim women’s self-perception from the inside of Muslim communities. The problem is that the concept of marriage as a woman’s highest achievement is wrong, but still a very popular and widespread idea, not limited to some particular country, culture or religious group. Some Muslim girl are subject to this idea as well, and they even abandon their successful studies after getting married — “I’ve reached everything, why bother?”

A woman, however, is not only a muse, but a driving force of the society, and so it was in the times of Prophet Muhammad, peace and blessings be upon him, and his companions after his death: the companions approached the prophet’s wives to get explanations of some or other religious ruling; where successful women occupied high posts in the state and had much social and political influence. We have a lot of such examples in the present, too.

But even if successful marriage is really all the girl needs, this doesn’t dispense her from the need of being well-educated anyway. Not to mention such extreme situations when the husband dies or becomes seriouselly ill, and the wife has to be the bread-winner for the family, — the spouse has to at least be able to keep the conversation at a variety of topics, so that the husband has something to discuss with her and ask her opinion, and so that he can proudly introduce her to his family, friends and colleagues. Eventually, the kids in their early years spend most of their time with their mother, and illiterate woman is simply unable to provide all-round education for her children.

So this may sound strange, but a housewife and a mother needs good education even more than employed woman, as the letter can limit her knowledge to some narrow professional sphere.

The facilitators, however, didn’t limit themselves just to telling the audience “you have to!” — they also presented a range of successful women both of the present and the past; spoke of the methods of setting a goal, planning one’s time, prioritization, rational use of resource during the study and social activities. The lecturers also stressed the importance of choosing the right social activities for every person, so it would be a pleasure doing them, not burden.

Besides, in this difficult time for our country, being involved in volunteering activities is important as hardly ever before. The society has a great need for us all, as everyone is the best in some sphere or action, and so everyone can find their own towing point in order to do something good for the society. All you need is stop justifying yourself with the lack of free time because of your family, your work, your study. Pleasure of God is the main priority for any believer. Prophet Muhammad (peace and blessings be upon him) narrated that the one most useful for his society is the one most beloved for God.