“Holidays are coming” Muslims And Festivities 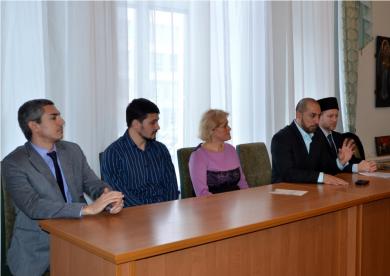 Tariq Sarhan, in his part, spoke of the Muslims’ attitude towards different holidays: “Many people confuse religious and non-religious holidays

Philologists of kyiv National Taras Shevchenko University not only learn foreign language, but also do their best to develop maximum understanding of the native speakers’ culture. For that reason, Department of the Middle East of the University’s Philology Institute arranges regular meetings with people of different ethnic and religious background and communities. This time, the AUASO “Alraid” representatives (head of Islamic Culture Department Mr.Tariq Sarhan and head of PR Department Mr.Oleg Guzik) who came for their traditional visit, brought along Mr.Said Ismagilov, Mufti of RAMU “Umma”. About a hundred people came to listen to the guests.

Besides the general introduction to the history of Islam in Ukraine (this topic is still researched into a very little, as the official position after 1944 (after the Crimean Tatars were deported) was “there are no Muslims in Ukraine, thus, there’s nothing to study here” — centuries of history of Muslim communities in Crimea, Donbass and all over Ukraine were ordered to be forgotten), topic of Muslim holidays was on the agenda.

Said Ismagilov spoke about the history of rise and development of Islam in Ukraine and gave his analysis of the current situation, including Muslim religious communities, their localisation, structure, hierarchy and activities.

Tariq Sarhan, in his part,  spoke of the Muslims’ attitude towards different holidays: “Many people confuse religious and non-religious holidays. There are, indeed, two religious holidays, which are Eid-al-Fitr and Eid-al-Adha. Still, there can be other holidays, — national (i.e. Independance Day) and some feasts traditional for some or other society. Taking part in other religion’s feasts is unacceptable, as well as celebrations with forbidden elements such as alcohol, haram food, flirtations, worshipping or praising some mythical creatures, etc. The  basic idea of every feast for a Muslim is worshiping God through spreading joy and strengthening friendship.”

Mr.Sarhan also mentioned how one can congratulate friends upon their fests: “We, the Muslims, can congratulate people of other religions upon their fests if we are in good relations with those people However, there’s a difference between being polite by saying “Have a happy holiday!” and speaking out the religious formulae of other confessions (like “Christ has risen!”, for instance); the latter is unacceptable for a Muslim.”

The students, however, will be able to learn more ever after the guests have left: Mr.Oleg Guzik on behalf of AUASO “Alraid” presented the Department of the Middle East with a set of Islamic literature where many basics are explained in simple manner.