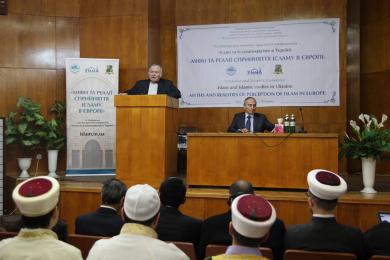 IV International Research and Practice Conference “Myths And Realities Of Perception Of Islam In Europe” took place on November 19, 2014 at the NAS Institute of Philosophy.

That big event was held by the auspice of NAS Institute of Philosophy, Religious Administration of Muslims of Ukraine “Umma”, All-Ukrainian Association Of Social Organisations “Alraid”, Ukrainian Association Of Religious Researchers and Ukrainian Centre of Islamic Studies. This was the fourth conference of that kind, and this time it covered such topics as modern tendencies of evolution of Islam in Europe and Ukraine, myth and realities of perception of Islam in Europe, functioning of Islamic Organisations and Institutions in Ukraine and the matters of homeland security, and Islamic Studies in Ukraine.

Despite the Conference had to move from Donetsk to kyiv this year, it still gathered the most prominent Islamic researchers both from Ukraine and abroad, students and Ph.D. candidates interested in those problems.

The special guests were Ms.Ninik Kun Nar'yati., Indonesian Ambassador Extraordinary and Plenipotentiary, Mr.Anatoli Kolodny, Head of the Department of Religious Studies at the NAS Institute of Philosophy (both had their word), and the officials from many embassies.

The event started with the Anthem of Ukraine, and then Mr.Said Ismagilov, Murti of RAMU “Umma”, took stage. The audience were shown a short documentary about three previous sessions of the conference.

After a short break, the working session began, where the participants could present their reports and discuss the topical issues of the event. At the closing ceremony they wished that the conference would be back to Donetsk, where it originated, before the next year.