The Spirit Of Fraternisation Is Stronger When Based On Mutual Understanding 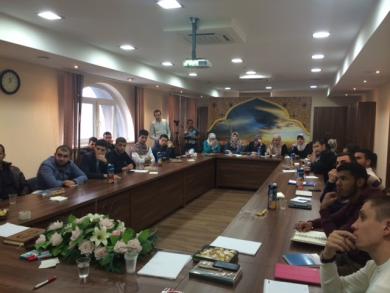 The Spirit Of Fraternisation Is Stronger When Based On Mutual Understanding

Many people are forced to migrate within the country today, saving themselves from the terrorists and occupation, so the matter of introducing Islam to non-Muslim Ukrainians is topical as ever — in order to avoid misunderstanding with the new neighbours, and making the newly arrived people’s adaptation to their new communities easier, as it was Crimea and Donbas where the country’s largest Muslim communities lived. Maidan, of course, gave birth to spirit of fraternization and aiming for mutual understanding between Ukrainians of all the ethnic and religious backgrounds; some simple theory, however, would make the process easier. The question is, how this information is to be systemized and introduced? Muslim volunteers from all over the country gathered at Kyiv ICC on October 18 in order to discuss those issues.

Muslims from seven cities, namely Sumy, Kharkiv, Dnipropetrovs’k, Zaporizhzhya, Kyiv, Vinnytsya, and Lviv spend the whole day discussing topical problems in the Department for Introducing Islamic Culture of AUASO “Alraid” work. The department’s work is mostly unreduced to refuting the prejudice on Islam in non-Muslim societies. Sunday schools with their free lessons of Arabic language and Islamic culture at “Alraid” Islamic Cultural Centres are one of such means.

Mr.Ismail Qady, the Deputy Head of AUASO “Alraid” reminded that one should consider their own morals before introducing Islam to non-Muslims or giving some advice to Muslims, as the beauty of Islam is shown by personal pattern first of all. Mufti of RAMU “Umma” Mr.Said Ismagilov joined the discussion and spoke of the importance of being persistent in developing any volunteering project, considering lots of difficulties the modern people face regardless their religion.

A practicum followed as the theoretical part was over, where the participants learned how to make an effective work plan guided by  Mr.Oleh Guzik, Head of AUASO “Alraid” PR Department.