“First Bell” Ceremony At The First Muslim Gymnasium in Kyiv, In Vyshyvankas And Chaplets (FOTO, VIDEO) 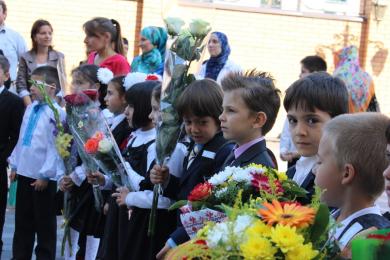 The Capital’s first Muslim Gymnasium, situated at Kyiv Islamic Cultural Centre, started its work with a solemn lineup and the first bell ceremony

The Capital’s first Muslim Gymnasium, situated at Kyiv Islamic Cultural Centre (3th floor), started its work with a solemn lineup and the first bell ceremony. Many schoolchildren were dressed in vyshyvankas (Ukrainian traditional clothing which contains elements of Ukrainian ethnic embroidery) as well as at other Ukrainian educational institutions this year, and the schoolgirls also wore traditional chaplets — little girls wore them in their hair, and one senior girl pinned the poppy band to her hijab. The lineup began with reciting the Holy Qur’an (“Read (Recite)! In the name of your Lord...”) and joint singing of the Ukrainian national anthem.

The right to ring the “First Bell” was given to the first-year pupils: they rang it in turn and then passed it to the Headmistress, Ms.Vira Fryndak. The school administration presented every schoolchild with an office folder containing office supplies. After a short introduction lesson children were gathered together to have a piece of a large tasty cake baked specially for this occasion.

This is the only Muslim gymnasium in Kyiv at present. It’s not necessary, however, to be Muslim to become a pupil — every child is equally welcome.

Maximum attention for each pupil is a peculiarity of this school; each class contains 5 to 15 children. Besides having high professional qualification, the teachers are expected to help each child fulfil one’s personal and creative potential. Teachers’ religious views weren’t the criteria for giving them a job.

The study plan, fulfilling the obligatory state education programme, also makes a good showing by advanced study of foreign languages (English and Arabic), lessons on Ethics and Ethnic traditions. The Gymnasium is semi-pension; the pupils will get halal meals and opportunity to stay at after school centre afterhours (until 4PM).

Headscarves: to wear or not to wear?

More than 40 pupils are registered at the school at present; many Muslim families, however, find this project interesting and are considering the possibility to transfer their kids either in the current or in the next school year. Besides Arabic, the children will study the Holy Qur’an.

There’s no uniform at the gymnasium at present: the children are expected to wear either black or dark-grey trousers and skirts with a shirt or blouse, combined with accessories at the pupil’s choice. They plan to develop a uniform design with elective options in the future, so that the kids have space for self-expression. In any case, the matter of wearing or not wearing either a kerchief or a headscarf is up to the schoolgirls and their parents to decide.