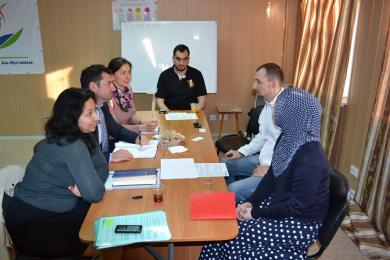 Representatives of the OSCE Mission are still concerned about the situation of Ukrainian Muslims in different regions of the country. So, the National Dialogue Project experts, namely Ms. Ainur Gulieva and Mr. Sokol Sega, attended the Dnipropetrovs’k Islamic Cultural Centre on April, 2. It bears reminding that similar visits took place at the Donetsk and Kharkiv ICCs earlier this spring.

In Dnipropetrovsk, the guests were hosted by the Head of “Al-Mustakbal” Social Organisation Mr. Pavel Fedosov, Head of the ICC Female Department Ms. Oxana Besarab and Head of Syrian Students’ Community Umar Al-Barjas

The Mission experts were concerned about any situation of systematic violations of Muslims’ rights in the region and whether this religious group was persecuted for any criteria.

Representatives of the Muslim community told that they hadn’t been persecuted for their religion, but directed the experts’ attention to some practical problems they had to face. For instance, they spoke about the Dnipropetrovsk Mosque built in 1897 and confiscated by the Soviet authorities, which hadn’t been returned to the believers despite the fact that different Muslim communities raised this issue regularly for more than a decade.