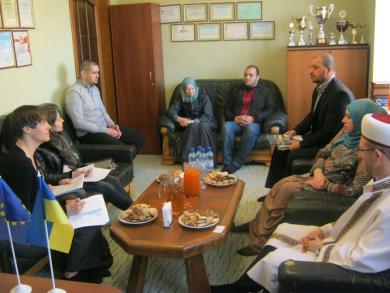 OSCE Mission on human Rights met Donbass Muslim communities on March 23 in Donetsk. OSCE representative, Ms. Eva Katinka Schmidt, visited the region for monitoring how the human rights are observed, particularly ethnic minorities, and taking a look at the work of the religious communities and organisations.

Ms. Schmidt, among other things, wanted to learn the problems Muslims face in Ukraine in general and in Donbass in particular. Mr. Ismagilov gave her and insight into the history of Islam and Muslims on the land of Ukraine, told the statistics on the number of Muslims living in Ukraine in general and in two regions, Donbass and Crimean peninsula, in particular. He also depicted some typical problems Muslims have to deal with.

Amongst others he mentioned that in some regions local authorities refuse to register Muslim communities. Ms. Tanzilya Isa, on her part, spoke about the problem the Muslim women have to face: a discrimination norm in the Ministry of Interior’s Instruction, forbidding women to take pictures for their national passports in their headdress not concealing the facial contours.

Ms. Schmidt promised that all the suggestions and proposals will be included into the OSCE final report on Ukraine.