A Happy Close-Knit Muslim Family - What An Individual Can Do 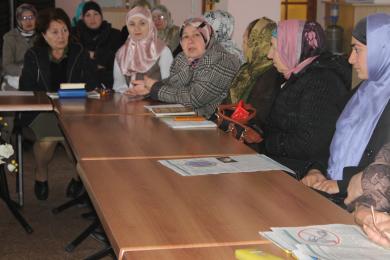 A Happy Close-Knit Muslim Family - What An Individual Can Do

It’s well-known that each family is a social unit, though this social unit is still unexplored area. Muslim family is no exception. This was the main topic of the roundtable held at the Simferopol Islamic Cultural  Centre on November 16.

Seeing misconceptions about the role of the Muslim woman in the family swirling in our society, and lots of negative stereotypes have their impact on how the non-Muslims see Islam. Activists of the Female social organisation “Noor” decided to clarify the issue and tell as many people as possible that a Muslim family must follow the rules set by the God Almighty.

“It’s wrong to say that Islam’s oppressing women. There’s no sense denying that some Muslim men, unfortunately, do - but they are alike men of other confessions, but same behaviour. The Shariah is built on the principle of a man and woman having the same dignity, but different abilities. Demands set for each of them are, of course, also different, for their own good,” - Natalia Sokur, a Muslimah having raised a daughter and raising a granddaughter, said.

Every Muslim family’s well-being depends greatly on the depths of each member’s understanding their rights and duties, - the other lecturer, Gulnara Stepchenko, said.

Besides, a Muslim family must be an integral part of the society trying to make maximum productivity in their social life and, at the same time, avoiding to adopt some destructive habits from their surrounding.