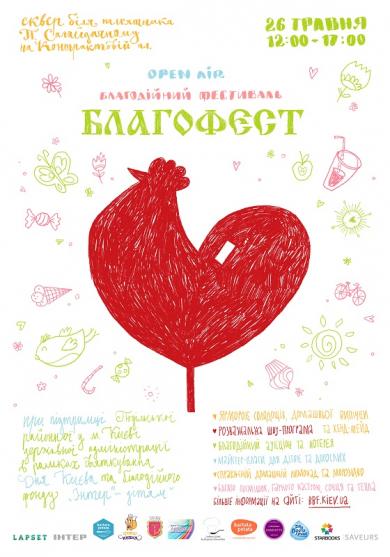 The charitable fair “Blagofest” (festival of good-doing) was organized on May 26, 2013, in the Day of Kyiv, to collect money for purchase of special bicycles for children with infantile cerebral paralysis (ICP). Female activists from the Women’s Public Organization “Mariyam” could not stay aside from such a good undertaking and brought to the fair home-made baking and hand-made decorations.

When we are together, we can do a lot!

The organizers’ call was responded by more than 70 participants. Apart from this, the undertaking was supported by the Podil District Administration (Kyiv) and private business entities. While the former made the documents required to arrange the festival, the latter offered tables, benches, umbrellas to cover from the sun, juices for participants and volunteers, stage and equipment, toilets and transport. Stage and equipment were in demand, as many artists came to support the festival.

Participants were selling their goods and conducting master classes in the warm atmosphere of benevolence and mutual help, each one being aware that everyone came here to make his/her own contribution in the common goal.

Each participant was given a place (a table or a part of table), where he/she could place his/her goods and sell them. Products’ prices as well as profit share coming to the money-box of the festival were fixed by participants themselves. The organizers specified only basic requirements for participation, giving maximal freedom to each one. Surprisingly enough, but nobody could be watched in the large crowd of people, attempting to take advantage of this freedom.

Once five hours of fair operation passed, the money-box contained a large sum, 378085 GRN, of which 480 GRN was the contribution from “Mariyam”.