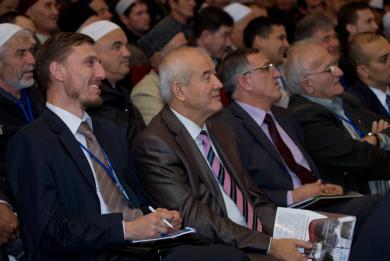 V Crimean Muslims Kurultai was held on Saturday, September 28. The delegates considered matters of current urgency and re-elected Emirali-Hajji Ablaev for Mufti of Religious Administration of Muslims of Crimea (RAMC). Head of AUASO “Alraid” Muhammad Taha, Head of AUASO “Alraid” Revision Commission Seiran Arifov and Mufti of RAMU “Umma” Said Ismagilov were among the special guests of the event.

Head of AUASO “Alraid” Dr. Bassil Mareei sent a greeting letter to Emiraki-Hajji on behalf of himself, the Association and the Islamic Cultural Centres this Monday. “You dedicated your life to performing your obligations to the Creator and the people, and the believers thank you for that. We hope for maintaining our further friendship and cooperation,” the letter read.

311 of 265 elected delegates were present by the moment the event began with the Holy Qur’an recitation and rendition of Ukrainian and Crimean anthems.

When finalizing its work, the V Crimean Muslims Kurultai also decided to sign all religious places, mosques, medreses, taqiyes and real estate for erecting religious buildings off to RAMC with their further assignment for the local religious organiыations’ use.

According to RAMC Press-Service, Emirali-Hajji Ablaev was elected for his fourth term by unanimous decision of 311 delegates in terms of open ballot.

It bears reminding that the Crimean re-elected Mufti was born on July, 11, 1962 in Uzbekistan (Dalverzin village, Bekabad region, Tashkent district).

Emirali-Hajji Ablaev was raised in a religious family who continued practicing Islam and teaching their children religious knowledge regardless the barriers put by the Soviet authorities.

When a young man, Emirali-Hajji like many of his peers takes part in Crimean Tatar struggle for their right to return to their Fatherland.

He came through the difficulties of resettlement and settled in the Ak-Chora village (Islam-Terek a.k.a. Kirov region).

Started taking personal lessons of Religion at the Ak-Chora mosque in 1993. Elected imam for Jeylav (a.k.a. Zolotoe Pole) village, and then for the whole Islam-Terek region.

Studied at Manisa Medrese (Turkey) in 1998 and performed Hajj the very same year. He also went to Lebanon in 1999 to improve his Arabic.

Was elected Crimean Mufti in 1999 during the Second Kurultai, taking into account his great input to Crimean Tatar social life and reviving their religious roots, traditions and culture.