Will the Authorities Hear the NGO’s Proposals on Overcoming Discrimination? 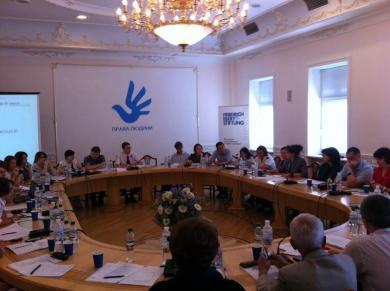 Will the Authorities Hear the NGO’s Proposals on Overcoming Discrimination?

On June 11, the International Organization for Migration (IOM) made a routine attempt to establish connections between the governing bodies and the NGO’s in preventing legal extremism along with discrimination based on race, ethnicity and religion.

The Head of the human rights NGO “Together with the Law” Mr. Moussa Arada also took part in the roun dtable dealing with these issues. The event was organized by the IOM with the support of Human Rights Commissioner’s Office and the Friedrich-Ebert-Fund (Friedrich-Ebert-Stiftung, FES) in Ukraine & Belarus.

What about Syrian Students?

The discussion was very vivid, and of course, representatives of each organisation wanted answers for problems they currently dealt with.

Mr. Arada voiced the hard question for many young Syrians who approached “Together with the Law” organisation seeking help. The matter of their concern is how to prolong resident permits for those Syrian students, who either completed their education or cannot continue their studies, because their war-stricken families aren’t able to pay for them any longer — until it’s safe for them to return to their homeland?

Sadly, many of those people have no one in their families survive in the bloodshed; there’s neither home nor relatives they can safely return to.

The human rights activists were perplexed by the serenity of the governing bodies’ reports on their successful work in the field of human rights protection. No wonder they were — plenty of problems were still waiting for solutions. The announced list became the rain on the authorities’ report parade.

Nevertheless, no one blamed, insulted or personally attacked others: the activists prefered to use the session for fruitful discussion.

Where Are We in The End?

Problem-solving package was enunciated as the result of the round table. It states the necessity of adopting changes to certain legislative acts and developing law enforcement mechanisms.

The document contains a number of measures for future strengthening of the collaboration between the governing bodies and the NGOs to prevent the discrimination of certain social groups and ease their adaptation to Ukrainian society.

At the same, time the document doesn’t contain either concrete measures or mechanisms for collaboration between the governing bodies and the NGOs. It also lacks not only deadlines for work in each direction — but even concrete terms of work commencement.

This raises the question of whether this discussion will indeed change real-world effects on the society.