Muslims, Christians and Jews of Dnipropetrovsk working side by side, to arrange a park on a dump area 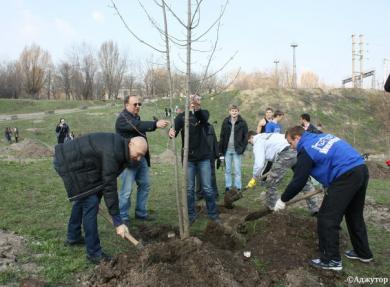 Muslims, Christians and Jews of Dnipropetrovsk working side by side, to arrange a park on a dump area

It was last weekend that young people from Dnipropetrovsk belonging to various confessions and ethnic groups continued works on arranging a park area in the historic center of the city, launched last autumn. People coming to participate that weekend were more than two hundred, including Muslim volunteers of the public organization “Al-Mustakbal”.

It was earlier in November 2012 that the ravine used for years as an unorganized dump was cleaned from garbage. After that young people began to rearrange the area for the future park by bringing humus and planting trees and bushes. Ten young plants were given by the Botanic Garden of Dnipropetrovsk National University (DNU), and the rest were brought by the volunteers.

New life for the ravine

The project is undertaken by DNU students and graduates. This area, turned into an unorganized dump, had even more griever misfortune in the war time, when in October 1941 fascists shot dead nearly 14,000 persons here, mostly Jews.

Organizers asked DNU administration and the Jewish community for help, but the reality proved to be even better than expected, as apart from DNU students and Jewish community members, Muslim residents and young people from national communities of Dnipropetrovsk came to participate. So, Ukrainians, Russians, Germans, Greeks, Jews, Armenians and Azeries were working neck to neck on the site… Not only local residents but foreign students who would leave the city after graduating the university were working together, as the foreigners wanted to leave something good in the city that had been their second home for as long as seven, ten or even fourteen years (for post-graduate and doctoral students).

Mr. Samer Assaf, chairman of the public organization “Al-Mustakbal”, tells about the stimuli guiding Muslim volunteers: “’Al-Mustakbal’ is translated from Arabic as ‘future’. It’s very symbolic, as we are planting trees that will become a beautiful park in future, pleasing the city residents even when we have left”.

Participants from “Al-Mustakbal” call its foreign members to join the action as volunteers guided by Islamic principles: “Our organization unites Muslims, and the Islamic religious teaching is about protecting nature and creating beauty on the Earth; cleanness and order should be everywhere. Unfortunately, we can see that this rule is not followed by people always and everywhere, including our brothers in faith. So, our participation in this truly international project where local residents of different nationalities and foreign students join effort to do something good, useful and beautiful comes to be especially important”.

Trees and flowers in place of garbage

This time the action took place on the two sites, in the ravine as such (lower site) and nearby the scientific library of DNU (upper site).

There was quite a lot of garbage even after the spring cleaning. The volunteers picked it up and filled the carcass of a truck. This work was being done by DNU students, Muslim residents represented by volunteers from “Al-Mustakbal”, volunteers from Street Workout Ukraine, the Youth Center of Dnipropetrovsk region, students from various HEEs, including foreigners.

Twenty seven trees were planted on the cleaned lower site; a hundred of willow sticks and other twisting plants were planted at the foot of the hill, for its reinforcement. Apart from this, the ravine will be beautified by five rose bushes, ten bushes of other species, and an oak alley that is looking now just as a straight row of young trees planted by volunteers from acorns. All the plants were watered in Friday and Saturday. Trees and concrete flowerbeds were whitened with lime purchased for charitable money given by anonymous entity.

On the upper site, seventy five plants were planted by students and staff from DNU and national communities incorporated in the organization “Yednist’” (“Unity”).

The action will follow up, as all the problems could not be resolved in the two phases. Young hearts are striving to excellence by putting garbage urns on the university area, painting garbage containers using paints and brushes purchased for charitable money coming from an anonymous business entity…

Yet, the greatest problem is that the slope is still covered by garbage; it, therefore, should be cleaned.
In spite of the effort to clean the ravine, trucks are still coming to the area, to throw construction and household garbage. Activists want to resolve this problem by installing a toll-bar at the entrance to the university area; they are preparing the appeal to city administration. They hope that the appeal will help to put an end to ravine pollution, as public conscience cannot be relied upon.

Also, regular watering is impossible now. DNU administration pledged to build a water pipe from the botanic garden to the ravine, and the Jewish community pledged to give the university a garden hose for watering.