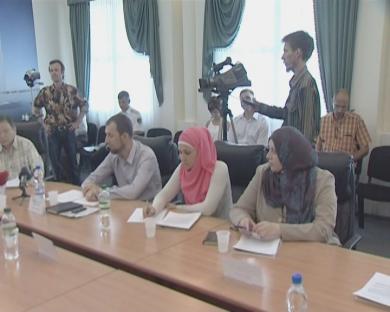 A round table organized on May, 24, 2013 in the city of Dnipropetrovsk discussed the burning problem raising deep concern of present-day and future parents alike, namely, the prospects for establishing elements of juvenile justice in Ukraine. The round table undertaken by the Public Council at the Dnipropetrovsk City Council was contributed by representatives from local self-administration bodies, prosecutor’s office, law enforcement agencies, public officials and lawyers. Members of public and religious organizations did not stay aside from it, including Mrs.Tansila Isa, head of the department on family, women and children affairs at the Donbas division of “Alraid”, and a member of the Public Organization “Al-Mustakbal” incorporated in “Alraid”.

The issues of enforcing elements of juvenile justice system in Ukraine provoked live public discussion, which is not surprising, because it concerns everyone’s future. Its advocates refer to the need to change the mechanisms for interactions between the family and the state, because now there seems to be no opportunity for protecting children in families where they are exploited and devoid of basic necessities.

Yet, opponents of juvenile justice (their protest rallies in 2011-2012 could halt a series of organizational and legislative initiatives of the government) stress that the reform will have nothing to do with children from disadvantaged families, because it’s extremely hard to work with each of these children. But social services will be charged with virtually unlimited authorities to take children off the good families where life styles do not correspond with the perceptions of underlings (lower-level officials). By logic, it’s much easier to take children off such families, to have good performance statistics, because these children can be easier dealt with and can be easier “accommodated” thereafter. However, enforcement of juvenile justice institute threatens the very existence of traditional families in the country.

Fighting the illness rather than its symptoms

Members of Islamic organizations, taking active part in the forum, spoke out at the discussion in favor of elaborated and rational propositions from both parties. Yet, according to them, efforts in this field will never be productive, because neither of the options – proposed either by advocates of juvenile justice or its opponents – is capable to remove the root factors entailing the whole set of social problems. When these factors are not removed, we will have no chance to eliminate the consequences in form of children’s crime, home violence or unsatisfactory life conditions of a child. Solutions are needed for problems that entail degradation of the whole Ukrainian society and its foremost component (the family) in particular.

The contemporary society has thrown away the Creator’s laws in hunting for worldly matters. However great creation a human may be, he or she is incapable to formulate flawless mechanisms or laws for vital functions, which would concern both private life and public domain. Solutions for these pressing problems will never move from dead-point unless laws and rules are fixed by a small group of people driven by own advantage rather than public benefit. As a consequence of these trends, we’ve been watching cultural and moral disorientation and global social crisis.

Only the awareness of this problem can help one to find the right way out of the existing situation. In fact, the fundament for harmonious life and fostering the successful, prosperous and healthy society can only be created by unchanging and true values and commands given to us by the Creator, the Most High.