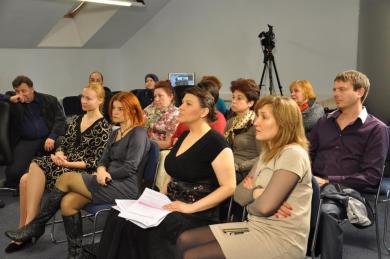 On April 18, 2013, the Women’s Political Club invited psychologists, sociologists, journalists, political scientists, members of various public organizations to discuss the topic “Violence against women: is the  global community capable to eradicate its roots?” Invited participants included Mr.Tarik Sarhan, head of the department on introduction to the Islamic culture at the Public Organization “Al-Nur”, and Mrs. Olga Fryndak, deputy-chairwoman of the Women’s Public Organization “Mariyam”.

In focus of the discussion was the Declaration on eliminating violence against women, approved on March 15, 2013 by the UN General Assembly and labeled hurriedly by many as “the document that would liberate oppressed Muslim women”. According to them, it’s the reason why Muslim countries did not rush to sign the document. But is it really so? Is the Declaration is as good and beneficial as it’s claimed to be?

In spite of the widespread stereotype, signing of the Declaration was objected by not only Muslims, as the resolute protest was voiced by representatives from Vatican and the Russian Federation. It’s not because these states stand for women’s slavering but because the Declaration, in spite of the title, contains several items shattering the society fundament.

Mrs. Olga Fryndak, a female Muslim born and educated in a Greek Catholic family, debunked the established stereotypes about Islamic way of life as “system for women’s slavering”: “Both confessions teach respect to elder ones, reverence to parents, family preservation and purity of relations. In this we are very similar”.

She adds: “While discussing the text of the UN Declaration on eliminating violence against women, demands were articulated that some items should be withdrawn. Regarding this, I can say that there’re too many contradictory items in the text, which are alien to traditional moral principles of any family, not only Islamic or Greek Catholic one”.

Mr.Tarik Sarhan spoke about men’s treatment of women in Islamic countries, the women’s social status, and how the law and the tradition protect women from violence.

Imposed norms like this create fertile grounds for violence

Mr.Andrey Mishin, director of the Public Institute for Family and Youth Policies, emphasizes that the UN has recently tended to impose certain norms on member states, claiming good intentions and purpose. “The states have been signing and ratifying the documents coming contrary to local habits, traditions or religious beliefs, thus making them part of national legal systems and creating thereby an internal conflict. Whenever a conflict occurs, this lays ground for violence which victims are mostly helpless and unprotected women and children”.

Mrs. Yelena Markosyan, an expert from the Movement “Ukrainian Choice”, elaborated on the problems of women violence and pointed out that the core reason for the violence is in the state power. “The Law cannot protect a woman, when the state power has taken from family and woman the traditional functions of upbringing, education, communication of family knowledge and practices. Several generations of soviet men had nothing in possession save for women. For many of our countrymen, the awareness that a woman is not an inferior being but an equal partner who may have a different vision of the world is but unthinkable”.

An analogous document, the Declaration on Elimination of Violence against Women, had been earlier adopted by the UN Resolution 48/104 from December 20, 1993. However, it is admitted even in the UN that its effectiveness cannot be properly evaluated, as there has not been a harmonized study devoted to observation or non-observation of this document by each UN member state and relevant measures taken at state level.

Because the final and agreed version of the present Declaration consisting of seventeen pages is not available on-line, its items can only be judged by selected passages of press-releases. It’s known, in particular, that the items have been withdrawn from the document, dealing with sexual orientation of men and women, protection of sexual minorities’ rights; that selected wordings concerning prohibition of abortions have been loosened … Yet, there has been no information about withdrawal of the demand on giving teenager girls the full freedom to chose the gender or the sexual partner, on supplying them with contraceptives and teaching their use.

In the Western culture, elimination of violence involves removal of all kinds of natural differences between men and women in matters concerning the roles (purposes) and legal rules. According to the Western ideology and understanding, violence means inequality in legal rules on marriage, such as the waiting period after divorce (iddah), guardianship and marriage-specific proprietary gift (mahr) or family support provided by man. They treat it all as violence that must be suppressed.

But will societies used to regulate their life by other norms and focus on other values blindly follow “directives from above”? It is obvious that the document authors overlooked a simple matter that the Declaration would not eliminate the cases of polygyny, which are rare enough, but put second, third or fourth fives in the condition of a cohabitant and make children deprived of the right to be identified as ones born in marriage.

This problem is one of the many to rise in Muslim countries. Obsessive propaganda of sexual relations and contraceptives in teenager age is nothing but a bomb under the moral foundation of Muslim  and Christian community alike; it looks just like lobbying interests of manufacturers of various kinds of contraceptives, which, to put it straight, are not always useful or safe for a young girl. A sarcastic phrase comes to the mind in this context, “inflicting benefit, causing good”.