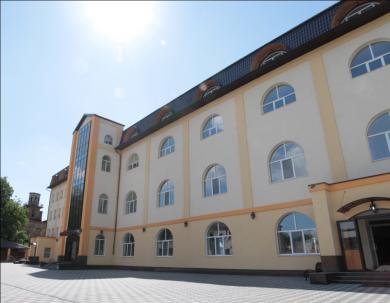 Another “Be a Donor!” Benefit: 9 Litres of Blood and UAH 1,892 for an Orphan’s Rehabilitation
Unpaid blood donation benefit on 29 December 2017 at Kyiv Islamic Cultural Centre started with emoin, for many of those planning to attend bitterly regretted to inform that they’d caught a cold... >>>

“Feed the Hungry”: Kharkiv Muslims Warmed the Needy With Hot Meals
Having a hot meal with tea or coffee is something that one especially appreciates in winter. Perhaps everyone living in countries where it’s cold in winter, knows that feeling of going home... >>>

Moral Example of the Prophet and Jerusalem’s Past and Present: Tarik Sarhan’s Seminar in Zaporizhzhia
On Saturday, 9 December, Zaporizhzhia Muslims gathered at the local Islamic Cultural Centre “Vira” (Ukr. “Faith”), for Mr.Tariq Sarhan (Head of the SCUAUA “Alraid... >>>

What Sets VI Summer School of Islamic Studies Apart?
Not only a different location (for it was the first time when the School was held in Odesa), and not even a new co-host (this year, the traditional organisators, namely CSUAUA “Alraid”... >>>