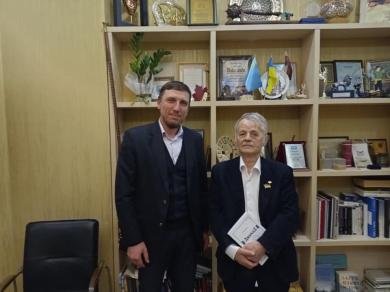 The head of All-Ukrainian Association "Alraid" Seyran Aryfov has met with the leader of the Crimean Tatar People and a member of the Ukrainian Parliament Mustafa Dzhemilev - he wrote about this on his Facebook page. At the meeting, the main attention was paid to the discussion of issues of particular concern to Ukrainian Muslims:

- Mustafa-agha has immediately responded to our offer to meet, - says the head of   "Alraid", - but since there are a lot of topics to be discussed which are relevant for Ukrainian Muslims, we focused on the most important ones at the moment. We talked about the recent information attack against our association, the wave of openly Islamophobic materials in the “yellow press” and about the latest searches in the houses of the Crimean Tatars in the occupied Crimea. The leader of the Crimean Tatars carefully read the materials that we provided and expressed his thoughts on this matter.

According to Seyran Aryfov, the topic of the future "Crimean Platform" was also proposed, and Mustafa Dzhemilev notes that the very idea of holding the forum seriously worries the aggressor:

— Needless to say, that we have also discussed the political situation in Crimea and repressions against our compatriots on the peninsula. It was interesting for me to hear it firsthand from him about suggestions aimed at the return of Crimea. And I assured Mustafa-agha that we, as a large public organization of Ukrainian Muslims, support the leaders of the Crimean Tatars in the main issues related to the protection and enforcement of the people's rights.

The head of CSUAUA “Alraid” gave Mustafa Dzhemilev his recently published book "Jihad". According to his words, Mustafa-agha accepted the gift with interest and, having familiarized himself with it, noted that it was a serious scientific work.

— We are committed to continuing the consolidation of Ukrainian Muslims, - Seyran Aryfov emphasizes. During the meeting, I noted our readiness to continue to work for the benefit of the Crimean Tatar people and all Muslims of Ukraine, despite any information attacks against the Muslim community of the country. And I am glad that this position has a response among the leaders of the people.