Congratulations to the winners of the XXI All-Ukrainian Quran Competition 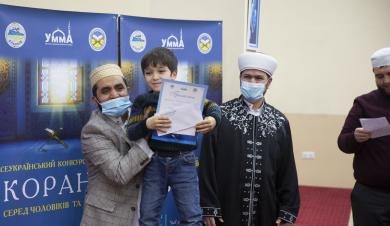 On November 14 and 15, 103 people took part in the XXI All-Ukrainian competition of Holy Quran learners held in Kyiv Islamic cultural centre. Men and women, old and young, demonstrated their Quran recitation proficiency: Someone – the whole Book, someone — its certain parts called juzes.

The competitions were held in compliance with the anti-epidemic measures. The social distancing between those present was under control. To minimize the number of people in the building, fans were asked to stay at home this year. Only competitors’ mentors and parents of young participants were present. Therefore, there were far less spectators than usual, unlike the participants: 103 competitors, including 45 women and girls.

The competitors were divided into several groups. The first day the jury evaluated the knowledge and proficiency of the participants who had learned by heart the entire Quran, were able to recite it in compliance with recitation rules, tajweed, and could explain the meaning of the verses. Also that day the participants competed in other categories: 15 juzes (half of the Quran) and 10 juzes.

The second day was given to women and girls who competed at different difficulty levels. Then men and boys competed in 5 juzes and 2 juzes nominations. Later that evening the jury announced the names of the winners.

Murat Suleimanov, the chairman of the Ukrainian Association for Holy Qur'an Studies, told our correspondent that such number of participants, 103, is a new record in more than twenty years of the All-Ukrainian reciters’ competition existence. This shows the revival of religious life, the revival of Islamic traditions in the Ukrainian Muslim community.

Sheikh Murat also noted that during the lockdown Muslims made good use of the time having taken it to the in-depth study of the Holy Book. That is why there were so many people who wanted to compete in categories 5 and 2 juzes.

— This year we managed to gather a record number of participants, 103 (115 applications were submitted - Ed.). The level of preparation was quite high and is growing annually. We see that. In the whole Quran category there were three students who got the highest score. We had to review the video of their performances in the competition to determine which of them would take the 1st, 2nd and 3rd places. We had to make sure everyone recited Quran perfectly. Only then we decided who won. As for the competition preparation and management: we have a special committee that prepared questions, and a special committee that select the jury. The jury members are specialists in Quran, Hafizes , experts in Tajweed. The overall impression was that everything went very well. We hope that next year there will be even more participants and they will demonstrate an even higher level of preparation and proficiency, —says Murat Suleimanov.

The jury of All-Ukrainian Quran competition consisted of: Quran Hafiz Sheikh Haider Al-Haj; Sheikh Muhammad Mamutov, one of the first graduates of the Supreme Madrasah for Quran Hafizes, nearly the first Ukrainian hafiz, the mosque imam at Vira ICC (Zaporizhzhia), RAMU Ummah deputy mufti; Sheikh Shadi Otman, Chairman of the Ukrainian Centre for Fatwa and Research, the head of Kharkiv Islamic Cultural Centre. On November 15, in the evening they announced the competition results.

This year the best reciters of Qur'an are:

Among those participants who learned half of the Quran by heart (15 juzes):

Congratulations to the winners and awardees! We sincerely advise you to start preparing for the All-Ukrainian Quran competition 2021, because time goes fast! This competition will be a great opportunity for you to improve your proficiency and recitation skills, and once again to compete with the best reciters from all over Ukraine!