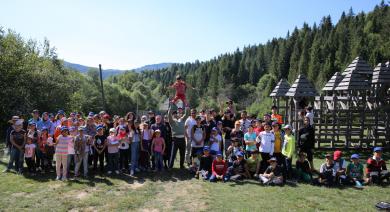 For 11 days (20–30 August) participants of Children’s Summer Camp “Druzhba-2020” (Ukr. “Friendship”) were enjoying the beauty of the Transcarpathians and the interesting schedule prepared for them by the Ukrainian Muslimahs League under the auspices of Association “Alraid”.

38 boys were divided in 4 sections, and 29 girls in 3 sections. They had their separate schedules: while the boys were studying, the girls played sports, and then they switched places. Everyday activities included calisthenics, classes of Qur’an and Islamic Ethics, sports and workshops. A trained medical doctor kept a regular track of the children’s health.

Noteworthy that 3 Non-Muslim girls decided to join a Muslim camp this year; one of them had been a regular for three years now.

The weather was mostly sunny, so many activities were brought outside.  Kids swam in a mountain river and in a pool, ran around with water guns, played paintball, picniked, listened to stories at the campfire, practiced in archery, painted posters, staged plays on episodes fro Prophet Muhammad (peace be upon him) companions’ lives, played intellectual games, enjoyed football and grass hockey, made shashlik and grilled vegetables. In the workshops, the kids knitted pillowcases from soft fluffy yarn, and decorated wooden jewelry boxes in decoupage technique.

There were excursions, of course: a trip to Tustan rock fortress, took a ropeway to Zakhar Berkut mountain, and went to a rope park.

There was no linguistic divide even for international participants, for the staff spoke five languages: Ukrainian, Crimean Tatar, English, Russian and Arabic.

The old-timers reunited with their friends and made some new, while the first-timers added to their social circles. Thankful mothers whore in their feedback that now they could take their child to a mosque in another city and the chances of the kid meeting someone they knew there were high. They also share that their offsprings did not want for the camp to be over. Even the first-timers who had a plan B returning home in case their first trip away from their family wouldn’t work out, wished they could stay longer. The parents thanked the camp’s staff for their work, and most of all for their patience, for “knowing my kids, I’m pretty sure that patience was something you needed a lot!”