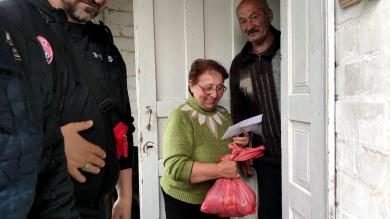 Imam of Zaporizhzhia Islamic Cultural Centre Muhammad Mamutov and the ICC Director Mr.Hamza Issa, accompanied by Novooleksiivka imam Usein Tokhlu, have been working hard since Monday, 18 May, in Kherson region. Their tasklist included buying healthy and well-fed bulls, organising halal butchery,  sharing the meat in equal parts and delivering it to the needy Muslims in Henichesk, Novooleksiivka, Partyzany and Haiove — all that is very demanding as of time and effort.

With 1.5 tons of beef overall, each pack contained 2.5 — 3 kg of meat. Still, some homes received a double of that amount: they had either a particularly large family, or a particularly strong need. Large families also received small sums of money per child, along with Islamic children’s books printed under the auspices of SCUAUA “Alraid” and RAMU “Umma”. Lonely elderly people, families with just one parent and families who lost their income or a considerable part of it due to quarantine, also got their share of meat.

The only exception was one family who lived in extreme poverty and didn’t have a fridge to store the meat. During the previous visit, when they brought another grocery pack to that home, Mr.Issa drew everyone’s attention that the home lacked a working refrigerator. The one standing in a corner had stopped working long ago, and was lacking the door. So this time, along with the meat, they brought this family a brand new refrigerator, with non-indifferent people having raised funds to buy one. According to sheikh Muhammad, one should have seen the look of surprise and excitement when the guests carried a large box into their yard; the kids were anxious to know what was inside. Guests from Zaporizhzhia, on their part, decided it wasn’t nice to present the family with a fridge that was empty, so, besides meat, they packed it with other food, including treats for the kids.

Overall, from the beginning of the weak, the volunteers delivered 300 packs of meat. They have two more days to deliver another hundred, and then return to their own families on time to celebrate the Eid al-Fitr (Ramadan-Bayram) together. The receivers of meat, on their part, will have time to cook festive meat meals.