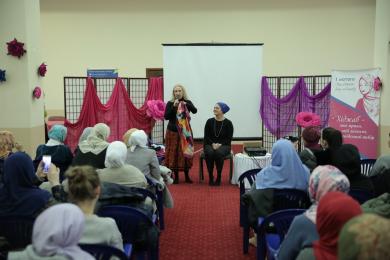 At Kyiv ICC, a large hall was full of Muslims and Non-Muslims alike.

Islamic Cultural Centres of both cities held a themed event on World Hijab Day on the very day of 1 February, and both offered their guests interesting agenda and treats.

At Kyiv ICC, a large hall was full of Muslims and Non-Muslims alike. The event was also honoured by ladies from the Embassies of Indonesia (Ms.Velly Elvira and her daughter) and Malaysia (Ms.Datin Roslinin Ismail and Ms.reni Hasrik Khan Tuan).

Volunteers of Women’s Organisation Maryam not only introduced the general criteria for a Muslimah’s clothing regardless of her preferred style, but also spoke about successful Ukrainian Muslimahs living and working in Kyiv: film director Tetiana Suchkova, clothing designer and owner of the Katrin Kim brand Kateryna yevdokimova, Counselor of the Minister of Defence and Paramedic Volunteer on the frontline Olha Bashey (covername “Krokha”), Psychologist Yulia Magerramova, Headmistress of Gymnasium “Our Future” Ruslana Martsinyshyna. They received token gifts from the WO Maryam, including certificate of gratitude and branded Hijab Day tea cups designed specifically for the occasion. Later quizz participants could also win such cups by giving correct answers to the questions.

Activists of WO Maryam spoke about traditional dress and headdress of different Muslim peoples and invited an expert from Ethology Institute of National Akademy of Science, PhD. Oksana Kosmina to speak about Ukrainian traditional women’s headdress. Ms.Kosmina brought along a pile of kerchiefs and even a namitka (Ukrainian traditional headdress made of a narrow linen stripes 30-50 cm wide and 8-12 m long. — Ed.) to demonstrate how they were styled. There was no shortage of volunteers to try on a traditional Ukrainian look.

Traditional Ukrainian headdress styling wasn’t the only practical workshop that evening: there were workshops of different ways of modern headscarf styling popular among Muslimahs, and the participants received headscarves and underscarves of their choice as a present.

The guests were also treated with tasty food, and had a chance to chat and grab some educational literature on Islamic studies.

In Sumy, a themed Hijab Day event was held on lesser scale, but not less interesting. Activists of the local ICC spoke about the history, criteria and the meaning of hijab as modest clothing, did a fashion show of different styles of such clothing, held a workshop of various types of headscarf styling and even a henna party of sorts where the participants either surrendered to the henna master or used paint masks to decorate each other’s hands.

In the end, everyone enjoyed fruit, sweets and of course, the sweet buffet centrepiece — a Hijab Day themed cake.