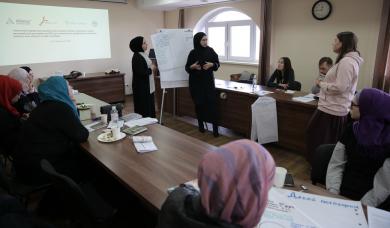 On October 28, the workshop on "Training Muslim Communities Leaders on overcoming stigma and discrimination of HIV-Vulnerable Populations and the Prevention of Socially Dangerous Diseases at Community Level" was started in Kyiv ICC. For three days, leaders and activists of Muslim civic organisations and associations were acquiring healthcare knowledge and skills for further community prevention and cure from HIV / AIDS and other infectious diseases. Most importantly, they got the information they needed to overcome such a negative phenomenon as stigma and discrimination against vulnerable groups, to protect patients' rights, and to build a tolerant, compassionate attitude in society.

The event organisers are Alliance for Public Health International Charitable Foundation (until November 2015, known as the International HIV / AIDS Alliance in Ukraine. - Ed.) and Eleos-Ukraine, a platform for interaction between NGOs and religious communities, the public sector, based on democratic values and beyond any type of discrimination to address social problems.

The activists from Muslimahs League of Ukraine and members, NGOs’ members of the All-Ukrainian Association “Alraid”, were invited to take part in the event.

While welcoming speech to the participants, Said Ismagilov, the RAMU Ummah Mufti, expressed his hope that the seminar would brolng polsitive results to all Muslims of Ukraine and all Ukrainians.

— Sometimes, some Muslims think that Muslims do not get sick, —  said Sheikh Said. - Well, it's nonsense. Of course, all people can turn sick - this is the law of Allah Almighty, anyone can get sick. And when I see that other religious communities, especially in Christian churches, have a very powerful social ministry, they care about sick people, they have the organisations that care about their fellow believers who need medical or social help, I understand that Muslims of Ukraine are at the initial level of that. We are lagging behind in this issue.

The Mufti stressed on another problem: some Muslim communities are so closed that they do not communicate with doctors or outsiders, and in these closed communities, people may have different illnesses and not know how to prevent the spread of the disease, do not know anything about prevention, diagnostics and modern methods of treatment:

— And it's not just about HIV / AIDS. These can be infectious hepatitises and tuberculosis - whatsoever! Therefore, an absolutely healthy, strong person who has no bad habits, keep an absolutely healthy lifestyle, can be infected, get sick and may also need help. And I think that among the Muslims of Ukraine there should be people who are proficient in educational work, able to provide psychological support and give good advice to their fellow believers, who know what kind of help can be given, where and how one can be tested for certain diseases, how to protect oneself, not to get infected and not get sick. Muslims must ask themselves: How can we help to our fellow believers, what should be the prevention, protection against these diseases?

Mufti recalled that since ancient times, even in the first centuries of Islam, Muslim medics "were leaders throughout the world because they understood better all diseases, diagnostics, prevention of infection and treatment," and gave an example:

— The Messenger of Allah, Prophet Muhammad (may peace and blessings be upon him), when he learned that a plague had started in one city, said - it is a very famous hadith! - that when the epidemic started, do not go there, do not visit this city. "And if you come there, don't leave it!" He gave his instruction on the quarantine. The messenger (peace and blessings be upon him) was concerned with these [sanitation and awareness] issues, and at the level available in the sixth century, gave an advice: what to do in such situations. Thanks Allah Almighty, we live in the 21st century, when humanity knows how to cure and how to prevent infections, how to help a sick person. And I hope that this seminar will be useful for the Muslim community and for the whole Ukraine.

Eleos-Ukraine chairman Serhiy Dmitriiev, a priest of the Orthodox Church of Ukraine, recalled that the epidemic of HIV, tuberculosis and hepatitis C is ongoing in Ukraine. Before the war, the so-called "red belt" was defined, and it consisted of mostly the Southern and Eastern parts of the country. He focused on another goal of the seminar: not only teaching on the prevention, but also to overcome prejudiced and neglectful treatment against the people with HIV or AIDS status.

— With the start of the Ukrainian territories occupation by Russians, a risk of losing control over the spread of HIV infection has appeared: people receiving assistance and medicine have no more received them in the occupied territory. Patients were in a difficult situation. Just imagine: you have escaped from the war, you have nowhere to spend the night, and nowhere to come back to. Many of them had to stop treatment, which is extremely dangerous for such diseases. In the temples of the then Kyiv Patriarchate, together with charitable organisations, we distributed leaflets about HIV-positive people, where it was written: do not be afraid of your diagnosis, come to us, we will tell you where you can restart your therapy, where to register, how to find the doctor you need. After all, people come to the church not to be blamed, but to get moral and spiritual support. I often recall the words of an HIV-positive priest who came to us from Sweden: “I got sick because it was a human immunodeficiency virus. And I'm a human." I want all Christian denominations, Jewish, Muslim, and other communities in Ukraine not to reject a person because of his/her diagnosis, because faith is a "limitless package" of charity. I believe that religious organisations will become even closer to people, especially those who need it.

The representative of the Alliance for Public Health welcomed the seminar participants.

For three days, until October 30, Eleos-Ukraine chairman Serhiy Dmitriiev and social programs and services expert, psychologist trainer Olha Pravdyva had been working as trainers with the seminar participants:

The participants learned about the main characteristics of HIV / AIDS epidemics, tuberculosis, STIs, hepatitis in Ukraine, their spread in the regions, target groups. They were talking about patients receiving substitution maintenance therapy (OST - a method of treatment for injecting drug users. - Ed.). The audience was told about the system of preventive, social and medical services. Stigma and discrimination, state and non-governmental programs to reduce the harm, role and opportunities of religious organizations were also raised. During the workshops, participants developed drafts of informational booklets and presented them, as well as being able to undergo self-testing for some diseases. At the end, they had a discussion and received certificates.