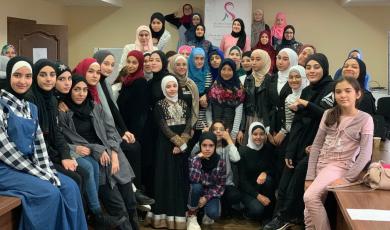 Last weekend, more than fifty young Muslimahs - teenage girls from all over the country gathered at the Islamic Cultural Centre of Kyiv to participate in a seminar organized by the Ukrainian Muslimahs’ League.

The event included several lectures on the relevant topics, the training on the time-management and priorities, as well as the art master class and conversations about a lot of things.

"All topics and issues were discussed through the prism of Islam," — emphasizes Vira Fryndak, one of the seminar organisers, a public activist and the first ethnic Ukrainian hafiz. — Even when it comes to Muslim daily activities. In Islam, human life is not separated from religion, so every action is seen in its conformity with the prescriptions and values of Islam. "

For the most part, these girls are the activists, who have shown their worth at the community activities, charities and events held by local communities.

“More than fifty people have expressed their desire to participate in the event. This ongoing seminar, which we hold twice a year, is both a cultural and educational event, and a psychological training, — says Vira Fryndak. — We covered such topics as: Aggression in society, bullying, Ways to overcome aggression, Ways to unlock develop your potential, Career guidance and development, Personal qualities every Muslimah should develop, and so on”.

“It should be noted that the girls were interesting in a wide range of problems, in particular, high-potential present trends, areas of activities for Muslim women," — explains the activist. — "Of course, we also discussed religious and moral and ethical issues, such as a Muslim woman performance in a society".

The event format included frank conversations, during which they were discussing various difficult life situations, have identified to what extent the girls were ready for managing risks and challenges, and learnt about solutions, prescribed in Islam, to overcome problems.

Participants expressed their thoughts on a particular topic, told about their achievements and setbacks; analyzed the reasons that had become an obstacle to success.

During the breaks between lectures, conversations and trainings, the girls had the art master classes on ebru that was likable and useful for creative potential development.

Due to the training conducted by Olha Fryndak, the head of the Muslimahs’ League of Ukraine, the participants learnt about the basics of time management; not only planning their daily routine, but also proper setting the priorities. They mastered strategies and tactics to achieve goals; tried to make a list of habits that would help on the way to the goal, as well as those ones that would most likely lead to failures and misfortunes.

At the beginning of the training, participants were interviewed on their expectations from the event.

At the end, young Muslimahs were asked to write down whether their expectations had been met, and to formulate their suggestions and wishes for a similar seminar in the future.

Most girls were grateful for the opportunity to acquire new knowledge and skills.

It turned out that according to the girls, a very important and valuable result of participating in this event was the opportunity to get acquainted and communicate with Muslimahs of the same age, to strengthen the relationship and to lay new strong foundations for further communication.

The cooperation, well-coordinated with NGOs from other cities, will promote effective planning and implementation of public projects in various fields (charity, mercy, environmental protection, etc.). Therefore, these actions will be not only local and separate ones, but the interregional or nationwide events and projects.