All-Ukrainian action "Islam is a Peace!" took place in major cities of Ukraine at the same day 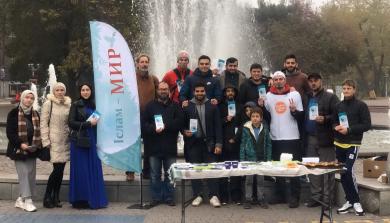 On Sunday, October 27, the actions "Islam is a Peace!" were held all in one in Kyiv, Kharkiv, Dnipro, Zaporizhzhia, Vinnytsa, Odesa and Lviv. It is a follow-up of the weekly activities within Ask the Muslim project that are taking place in Ukrainian cities where the AUA Alraid Islamic Cultural Centres have been operating for over a year and a half.

Tariq Sarkhan, an activist of Mercy for Mankind International organisation, is the head of the Introduction to Islam Department at Kyiv ICC. He is a regular participant of such actions, and took part in the last one held in the capital on the Independence Square and Khreschatyk. He kindly told us about the purpose of Islam is a Peace project:

— The actions on familiarizing the local population with Islam, which can be called "street appeal", began more than a year and a half ago. But they took place in different cities at different times, with different slogans, depending on the occasion, and were related to particular events in the Islamic world or to things that were happening around. Within Ask a Muslim project, followers of Islam answered all questions from passers-by. Therefore, all questions were focused on a particular main topic, for example: What attitude have the Muslims to other religions, or "I love Jesus because I am Muslim," or "I love Mary, mother of Jesus, because I am a Muslim ”… We wanted to come up with a new slogan - what a precious place takes peace is in the minds of Muslims and what peace means in Islam. But it would be wrong to do this in just one city because the peace must spread all over the world - so we decided to hold an all-Ukrainian action under the slogan “Islam is a Peace!”. It was supposed to take place in the same day and at the same time in different cities of Ukraine – in which Muslims live, Islamic Cultural Centres, and youth organisations operate and their activists could get out on the streets, communicate with passers-by and to explain them the meaning of this slogan.

The booklet "Islam is a Peace!" was printed especially for this event and was given to anyone who came to speak with Muslims. The organisers and participants of the action hope that it will not be just a souvenir, but encourage thinking about it - especially those who asked about the so-called "aggressiveness" of Islam and calls for "holy war":

— We told people that peace is also highly appreciated in Islam that there is no term "holy war". A war cannot be holy - only peace is holy! Peace is so sacred that it is one of the Most High’s names! "Peace" is a synonym for the word Islam, it is the name of paradise, and what people wish for one another, while greeting with the words: "Assalamu Alaykum!"- said Tariq Sarkhan.

It should be noted that activists are very pleased with those who are interested, but always very tactful, avoiding obtrusiveness.

– Dozens of people - one hundred or even more – come as usual; so we try to make each action like a mini-festival, a small holiday for the locals. We use elements of authentic cultures, arts and crafts typical for Muslim nations. – Says Mr. Sarkhan. – So this time, in Kharkiv, for example, women activists, who are great at the art of mehendi, participated in the actions, and were painting passersby’ hands with henna. Even the children came up to the girls, asking their small hands to be painted. We aspire to show the amiability and our desire for friendship, in order to "break bread" in a brotherly way, we come out with treats for passers-by: oriental coffee, tea, sweets. And even if you don't want to talk or take a booklet, we just have a treat and we are happy to share our soul. All we need is to show what Islam is, what Muslims are and what they really should be.

Among the most frequent questions were those included misconceptions generated by some unbalanced information at the media. One of such misconception is that Muslims are "potential terrorists":

— If we come out in the streets with the slogan "Islam is a peace!", then, of course, people ask: where did terrorism come from, where did the war come from? We should explain that aggression or religious fanaticism is a feature inherent to people of all cultures, nationalities and religions, but it is an extreme and a manifestation of betrayal of faith and religion. It is not a religious practice of the true believer. A God-fearing man will always find the wisdom and patience to send a message of his/her faith. Violence is used due to the ignorance, lack of knowledge. Disbelief is not the enemy of truth. The true enemies of truth are ignorance and hypocrisy, — says Tariq Sarkhan.