"I love Mary, mother of Jesus, because I am a Muslimah" — an awareness campaign in Mariinsky park 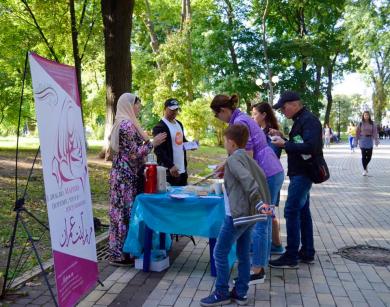 On September 15, the volunteers from the Maryam Women's Organisation held an educational event "I Love Mary, Mother of Jesus, Because I'm Muslimah." The project was also supported by Tariq Sarhan, a representative of Mercy for Mankind international initiative. It should be noted that volunteers  — Margarita, Daria and Olga  — are also members of the Mercy for Mankind group, and such educational campaigns are coordinated through the initiative’s group on Viber.

On Sunday, a small number of the group members could come, but a lot of people were interested in getting the information about it, as a "Animal Rights March" was going in Mariinsky Park at the same time, and there were much more people than usual. People whose hearts are open to the world became a great audience: they were coming to the stand, asking questions, warming up with tea and coffee, participating in a quiz, having awarded with sweet prizes at the end - fragrant honey puffs.

The organizers were pleasantly surprised that many of those who came up to them already had a basic knowledge of Islam and Muslims, so the quiz was easy for them. Even the kids showed good awareness! Others, on the contrary, were coming up to due to lack of knowledge: they wondered what connection was between Mary and Muslimahs. And they were told that Muslims respect Mary very much, and know not only about her life, but also about the lives of her parents and relatives; mentioned in Qur'an, which includes the whole Surah named after Mary, and the miracles associated with this righteous person are mentioned in great detail.

It was interesting to communicate with a group of devote Christians: they found much in common with Muslims concerning their knowledge and attitude toward that person. They noticed differences as well, but discussed them with respect for each other's views. The two groups shared even their contacts with each other, and Christians promised to visit Kyiv Islamic Cultural Centre, noticing that they would not change their religious views, though. They were assured that no one would require it from them: They were just asked to come with peace and hearts open to dialogue and building the bridges.