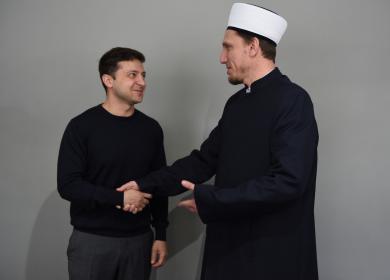 On 2 May, Head of “Alraid” Association Seyran Aryfov accepted the invitation and took part in the President-elect, Volodymyr Zelenskiy, meeting with Muslim religious leaders.

At the meeting, the participants spoke about the needs and problems of Ukrainian Muslims. Sheikh Seyran, in particular, stressed that it’d been several decades since the pro-Russian forces started informational attacks upon the Ukrainian Muslims, again and again telling the Ukrainian society, law enforcement and secret service about mythical “Ukrainian Muslim extremism”. At the same time, the real problems (where the Muslim’s weren’t involved!) had no due attention. Moreover, it was the Ukrainian Muslims who remained the largest pro-Ukrainian social group on the territories occupied by Russia.

The President-elect, on his part, listened to every participant with great attention and later assured the Muslims that he was deeply interested in maintaining interfaith peace and cohesion in Ukraine. The future Protector of the Constitution took notion the “Alraid”s developed international ties, for he stressed his intention to further develop Ukraine’s international involvement, in particular, with both Muslim nations and Muslim communities in the West.