Cold but Undamped: Young Conquerors of the Carpathians Returned Home 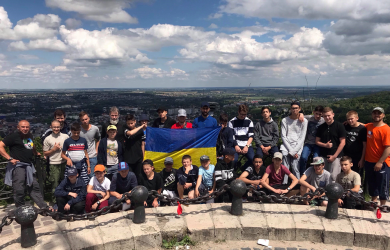 On the very next morning after we reported how the scouting tour for teenagers was going and that they were just about to conquer a mountain, the images of those teenagesr were all over the news. Back then, nobody could predict that it would be snowing all night (in the end of June!) and the Leader of the group would decide to not only call the rescue squat, but also change the further scouting plans.

On 23 June, a mountain rescue squat reached the group of tourists (including 27 children) who stopped for the night on a Blysnytsia mountain (Rakhiv District).

According to Diliaver Saidakhmetov, on of the teenagers’ escort group, the attitude wasn’t high, on the contrary, that was an ordinary class 1 (the lowest difficulty) touring route. It was raining the night before, so the group decided to put up tents and give the kids a break, so that they could have a meal, some rest and some warmth The plan was, that the next morning the group will have a breakfast, let the sun dry their belongings and proceed to the peak. Yet that was where foul weather stepped in: at night, it started… snowing - in late June. Due to low temperatures and thick mantle of snow, the Head of the group decided to call for the rescue squad. Having arrived at the scene, the rescue group approved the decision, saying it was very timely. They also shared that such occasions weren’t often in the Carpathians at that time of the year, and advised the group to give up their further climbing plans and change the route, as weather specifications showed that it could get even worse. So the group, guided by the rescuers, packed their belongings and headed down for the valley, where they stayed for the night in Rakhiv.

Despite the unpredictable weather, none of the kids fell ill, for the medical worker that always accompanies the group took steps to address their early symptoms of cold. So in Lviv, where the group arriver after altering their plans, everyone was full of energy, and easily walked the whole ekspromtu tourist route, which included the Vysolyi Zamok (Ukr. “High Castle”), the narrow streets of the old city, and even had enough strength to play football!

Despite the camping’s early closure on 26 July due to unpredictable circumstances, the teenage boys were satisfied and said they would like to come the next year, too.

The accompanying adults noted that the whims of the weather had a positive impact on the teenagers: they became more serious about the discipline and started following the elder’s instruction more thoroughly.