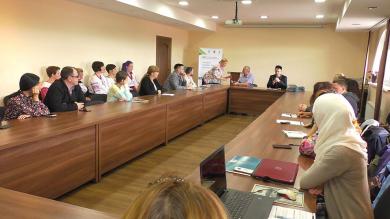 On Sunday, 2 July, VII International Summer School of Islamic Studies was launched at kyiv Islamic Cultural Centre; this year’s topic is: “Islam and Social Progress: the Past and the Present”. The event gathered historians, philosophers and religous studies specialists from both Ukraine and abroad: Poland, Turkey and Moldova. Here one can meet both regular participants of the School and new faces, including many people who came to listen, not participate. It bears reminding that the school s held by the Ukrainian Centre of Islamic Studies under the auspices of CSUAUA ”Alraid”.

During the opening ceremony, Mufti of RAMU “Umma” Sheikh Said Ismagilov, who is also the Head of  Ukrainian Centre of Islamic Studies, reminded the participants of the history of foundation of the School as a place to exchange thought and evaluations on the modern tendencies in the Islamic world, and its evolution over the years. He also provided general information about Islam and Muslim Community in Ukraine, particularly the impact the occupation of some Ukrainian territories had on the local Muslim community.

Another lecturer of the School, a prominent Ukrainian religious researcher and President of Centre of Religious Studies and International Spiritual Relations Ihor Kozlovskyy, also greeted the audience.
The participants were presented with first ever Ukrainian textbook on Religious Studies. The book was presented by its authors, Sheikh Said Ismagilov and religious recearcher and translator Mykhailo Yeakubovych.

According to one of the collaborators of the textbook, Mufti of RAMU “Umma” Said Ismagilov, that edition is very important for the national Islamic Studies:

— I’ve been coming across other textbooks before, but all of them were printed in Russia. And the problem wasn’t only that they were in Russian, but also that we all know that Russian Federation doesn’t tolerate their own citizens of Muslim faith very much.

Mykhailo Yakubovych noted that the book was written from both the religious and the scientific prospect, and was meant for high readership: very often people who aren’t Muslims and are not interested in Islamic Philosophy have questions about Islam, as they have a Muslim friend, neighbour or colleague and want to understand them better.

International School of Islamic Studies is to last until 5 July.